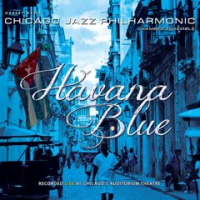 With diplomatic relations between the U.S. and Cuba warming, the chances for musical reciprocity have escalated apace. As one who has long admired the music of our neighboring island the the south, Chicago-based trumpeter / composer Orbert Davis was quick to seize the initiative, spending nine days in Havana with Cuban-born choreographer Frank Chavez in October 2012 and returning with the outline of his seven-part "Havana Blue Suite," which explores and delineates the tantalizing harmonies and rhythms that are a part of everyday life in Cuba.

The suite, which was recorded in concert at the Chicago Jazz Philharmonic Chamber Ensemble's home base, the Auditorium Theatre at Roosevelt University, was presented as a collaborative venture with Chavez' River North Dancers, who of course cannot be seen (or heard) on the CD. The Chamber Ensemble is comprised of nineteen members including two violins, a viola and cello in addition to horns, reeds, rhythm and percussion. The suite embodies only two fast-paced movements, the first of which, "Al Tin De Vi," was written not by Davis but by Ernesto Lecuona, one of Cuba's most celebrated composers (author of "Siboney," "Malaguena" and "The Breeze and I," among other works). The second upbeat entry is Davis' dynamic "Havana @ Twelve."

"We wanted to create an innovative, contemporary take on Afro-Caribbean music," says Davis, "departing from the cliché of fast tempos, bright colors and ruffled shirts." Mission accomplished. The suite is charming in every respect; more temperate, perhaps, than one might expect, but no less seductive because of it. Davis takes most of the solos, leaving no cause for complaint in that area. The suite closes with a truncated version of "Orlando's Walk," which is repeated later as part of a studio session designed to augment the suite's less than twenty-nine-minute playing time. Although no personnel changes are listed on the album's jacket, the studio tracks were clearly recorded by the Jazz Philharmonic's big band, not its chamber ensemble (more brass, no strings).

The first of them, Antonio Carlos Jobim's rhythmic "Chega de Saudade," a showcase for Davis' expressive flugelhorn, is followed in order by Dizzy Gillespie's oft-visited "Manteca" and Davis' compositions "Seraphim" and "Orlando's Walk" (extended version). "Seraphim" is a lovely waltz-like tune with Fender Rhodes and flugel solos to match, "Orlando's Walk" a saucy cha-cha that closes the album on an auspicious note after some fiery trumpet exchanges between Davis and (presumably) either Chris Davis or David Spencer—or perhaps both. Havana Blue is a bright and colorful precis of Cuban music as filtered through the eyes and ears of a superb American jazz composer who undoubtedly admires, appreciates and understands the genre.