Hauschka at The Kevin Barry Room 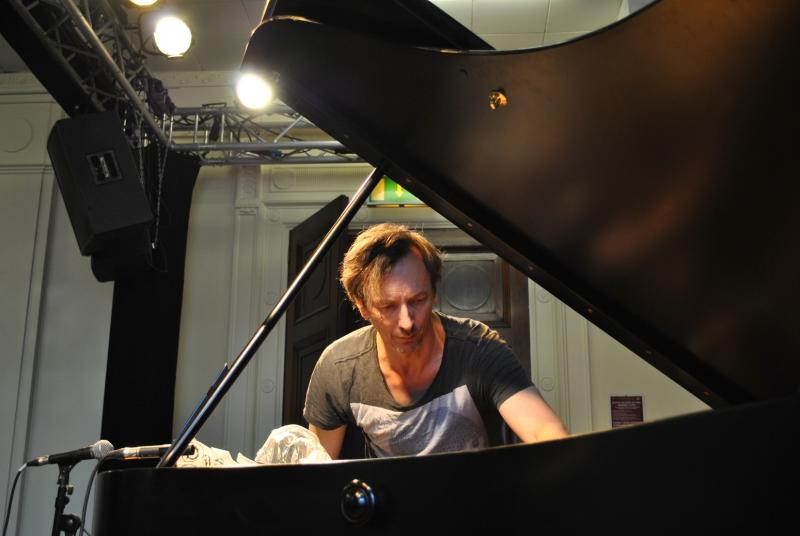 Had Volker Bertlemann pursued a career in classical music he probably wouldn't have needed a nom de plume, but in the rather niche market of prepared piano music—for which he is best known—a little strategic marketing can go a long way. Bertlemann adopted the name Hauschka for his first foray into his brand of powerful minimalism on Substantial (Karaoke Kalk, 2004), and over the past decade the name has become synonymous worldwide with music of singular invention.

The supporting trio of Kevin Murphy, Matthew Nolan and Adrian Crowley, on the other hand, just need a catchy band name and their own take on minimalism could yet be a world beater. Whereas Hauschka's circular figures, hypnotic mantras and canny sound manipulation owe a debt to composers Terry Riley, Steve Reich and John Cage, Murphy, Nolan and Crowley—already that sounds better—occupy a twilight zone between avant chamber music and experimental folk. The trio's thirty minute warm-up set for the main act turned out to be utterly engrossing. It was also a welcome surpise given that the trio wasn't billed to perform and nobody knew it even existed as this was just its second gig.

Yet already, as this gig demonstrated, Murphy (cello), Nolan (electric guitar and omnichord), and Crowley (B flat clarinet and shruti box) have a definable trio sound that is the fruit of their evident chemistry. On the fifteen-minute opener, a repeating guitar motif formed the canvas for a series of long cello notes, with the shruti box's harmonium-like drone drifting in and out of the mix. Occasionally Murphy's deeply resonant cello notes would veer sharply into more angular territory before leveling out again, providing an unpredictable edge to largely meditative music.

Clarinet was more prominent on the shorter, second number, weaving in and out of tandem with gently oscillating cello lines as Nolan maintained a six-note motif. Cello drone and dominant clarinet—deep toned like a baritone—combined to create a powerful wall of sound. Murphy's curling lines fractured into a mantra-like riff whose insistent rhythm contrasted with sustained waves of sound.

The final piece was a more lyrical affair. Melodic harmonium and airy omnichord patterns as delicate as a musical box floated over deep, riffing cello. Cello and harmonium briefly slipped out—leaving the omnichord in serene isolation—before reanimating the three-way dialog once more. A clarinet melody emerged above sawing cello and omnichord glissandi. The contrasts between urgent and gently persuasive voices, between repetitive and flowing lines—which all gradually faded to nothing—made for an absorbing sonic journey.

If Murphy, Nolan and Crowley can just get a name together they'll be flying. After all, every great story deserves a good title.

After a brief intermission Hauschka took to the floor and made a gracious introduction, during which he announced that the music would be from his new CD Abandoned City (City Slang, 2014). The inspiration behind the CD derives from abandoned cities. An on-line search—which could easily wipe out an entire day—reveals estimates of upwards of 2,500 such cities around the world.

Depletion of natural resources, man-made and natural disasters, wars and a host of economic, geographical and political reasons have lead to cities from ancient to modern times being completely deserted. It's quite a fascinating topic, so much so in fact, that documentary and film makers, visual artists, writers and tourists have created a minor global industry out of these carcasses of concrete and steel reclaimed by nature.

The first piece, however, was not a composition but an improvisation. So much of Hauschka's music is about the manipulation of sound and he began by taping a small chain across the piano's innards, creating a harpsichord-like effect when the hammers dropped. Right and left hand ostinatos criss-crossed in patterns both rhythmic and—to a greater or lesser degree—melodic. The hypnotic, energizing improvisation segued straight into the impressionistic "Craco." The southern Italian hill town of Craco dates back to 1060 but was abandoned in 1963 because of recurring landslides. The tune's melody was at once achingly pretty and melancholic, with reverb creating a sustained echo that carried the imagination to empty medieval streets.

Hauschka explained the relationship between the music and abandoned cities: "I was looking for a metaphor that describes how I feel when I write music." The total absorption in writing music to the complete exclusion of or isolation from the world provokes feelings not only of fear and loneliness, but a sense also of fulfillment, Hauschka told the audience. This underlying tension of conflicting emotions ran throughout the evening's music.

Hauschka worked the piano keys hard on "Elizabeth Bay," a rhythmically relentless evocation of the heavy industry that drove the Namibian city until its diamond mines were exhausted in 2000. The pulsating wall of sound gradually dissipated, with Hauschka removing an incredible array of object—tuning forks, ping-pong balls, felt pads, chains—from the piano's innards at measured intervals. Then, employing e-bows on the piano strings, the pianist conjured ghostly sirens whose cries rose then evaporated.

The encore, the appropriately titled "Gaffer Tape" began with the ritual dressing of the piano strings with half a dozen strips of the famous black tape. The tune that followed had a frenetic playfulness that sounded like the love-child of Mozart and Abba, and it would have made the perfect soundtrack to a black and white silent caper. In the end, a standing ovation rewarded a captivating performance. As striking as Hauschka's recordings are, they cannot quite prepare you for the full drama of the pianist's live theatre.

Other than Guinness running dry it's difficult to imagine what calamity could lead to the population of Dublin ever abandoning the old city. In the event, Hauschka's epic soundscapes would bring dark, haunting beauty to such a catastrophe.