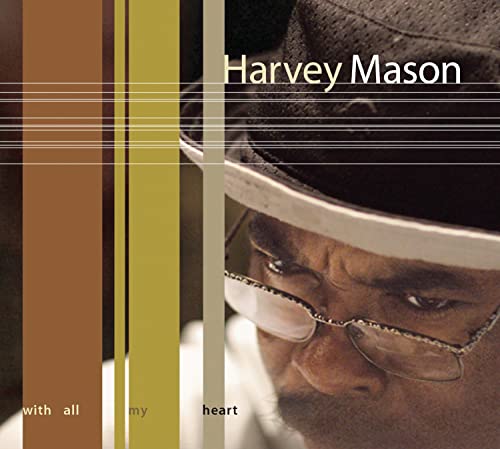 Harvey Mason
With All My Heart
RCA
2004

Straight-ahead jazz fans and the more "purist" minded of jazz listeners among us have a tendency to write off the overall musical abilities of those who play contemporary or smooth jazz. This often boils down to little more than guilt by association, as one will make an assumption about the musical talent of someone who performs music they don't really respect. Just because of the perceived musical easiness of playing smooth jazz however, one assumes that those musicians are doing about all that they are able to. In a music where soloing amounts to little more than playing exaggerated blues licks and meandering pentatonic solos, this is understandable.

All of this is unfortunate though, because while many of these musicians effectively obscure their deeper talent for years- playing music that is essentially, beneath their abilities, there are some truly great musicians who happen to play those music forms that straight-ahead fans could definitely appreciate given the right context. George Benson, David Sanborn, Bob James, and a certain other member of the band Fourplay, are musicians that can really nail straight-ahead material when given the opportunity. That other member of course would be drummer Harvey Mason, who showed off his tasteful kit work with Ron Carter on his record When Skies are Grey and here presents what he calls: the piano trio record he's always wanted to record.

With All My Heart is indeed the stuff of dreams if only for the salivation- inducing greatness of the roster of pianists involved. The record moves through a roster of pianists that is simply unparalleled: Kenny Barron, Chick Corea, Fred Hersch, Monty Alexander, Bob James, Cedar Walton, Brad Mehldau, Dave Grusin, Mulgrew Miller, and Hank Jones are all represented here with one track apiece. The bassist varies from track to track as well, with Ron Carter playing with Kenny Barron, and an almost surreal twist in Charlie Haden being paired with Bob James.

Those immediately skeptical of such an all-star affair, along with those who don't expect much from "the drummer of Fourplay", are bound to have their expectations disappointed. Indeed, those who overlook this record because of either of the above reasons are doing themselves well, a disservice to their ears. Now is this a fantastic record, a tour de force? No, and it would be disingenuous not to mention that the record does suffer from some of the typical problems of an all-star record (solos not always as long as one would like, bands not always that tight...) and that Mr. Mason's drumming is not quite terrific either. But- and a big "but", even in the context of the piano trio recording, which has some very high standards going for it, this is a very solid, solid outing.

Half of the numbers on this record are really quite fine, and two or three are even exceptional. Chick Corea's highly emotive playing on "If I Should Lose You", for example, is endearing to say the least. Often accused of playing "cute" or overly sentimental, here that same quality really works to the advantage of the wistful material. Contrary to logic about all-star records as well, he and others really dig in and play hard, especially Herbie Hancock and Kenny Barron, who play up-tempo numbers where they really get to "shred."(Hancock plays an abstracted version of "Speak Like a Child." In one of the nice surprises as well, we get to hear a rather extroverted Fred Hersch. Hersch plays in a much more dramatic, bravura style than he typically does- in this case, on "So Near, So Far") and his interpretation, like Chick's, is one of pleasing but not maudlin sentimentality, with his rising crescendos over the chorus being quite memorable.

One of the other nuggets on this record is, again- defying myth about "smooth jazz" musicians, Bob James' rendition of "When Smoke Gets in Your Eyes." The arrangement is fine, and James' soloing has a ruminating, subtle quality that reveals a sensitive pianist at work. Dave Grusin's appearance here, the writer should add, is also totally respectable and tasteful.

In what is arguably the most interesting track of the record though, Brad Mehldau's take on "Dindi" is full of melodic beauty and may offer after all, the best trio interplay of any track here. Speaking of which, the problem one might anticipate with a record like this is that not all of the trios sound that tight or well- rehearsed. Truth be told, there are 2 or three tracks where this seems like the case, but overall, it's not a noticeable problem. Some of the trios- namely the Barron, Hersch, and Mehldau tracks, sound great in fact. Is this the quality of Barry Harris or Kenny Barron's working trio? Of course not, but it's certainly not to other extreme of pick-up band, under-rehearsed mediocrity either.

Mason's drumming, as mentioned, is not the selling point of this record. The pianists solos, the arrangements of the tunes, and the material chosen by Mason- are. However, Mason's drumming, even if doesn't place him in the first tier of straight-ahead jazz drummers today, is certainly skilled and undoubtedly shows the experience and wisdom of a veteran. Mason never overplays here or tries to really draw great attention to himself for that matter, and his work on cymbals is often quite subtle. Moreover, like Billy Higgins he has a nice airy approach to the kit that lets the music breathe. It's only that his time feel is not always as propulsive as it could be, and he having rather generic fills- which put him on a slightly lower rung than some of the more in-demand drummers of today.

All that said, Harvey Mason certainly deserves credit for putting this fine piano trio record together and leading all of the respective trios. He set out to record the piano trio record he had always dreamed of making, and in realizing the project did something everyone involved should be proud of. It is moreover, a tribute to the producers (including Mason) and all of the musicians involved here that many of the pitfalls of all- star "guest fests" are somehow avoided. All told, there's some magic here, and if people can get beyond the "smooth" stigma and the guest-fest stigma, they are in for a certain treat. With All My Heart is one of the best piano records of the year so far.

Tracks: Bernie's Tune; If I Should Lose You; So Near, So Far; Swamp Fire; When Smoke Gets in Your Eyes; Hindsight; Dindi; Without a Song; One Morning in May; Speak Like a Child; Tess.

Title: Harvey Mason: With All My Heart | Year Released: 2004