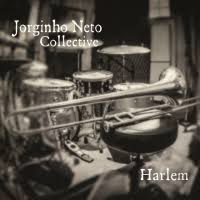 American jazz musicians for years looked to the exciting rhythms and exotic melodies found in Brazilian music, to nourish the music's evolving nature. In a reversal of roles, the Jorginho Neto Collective, a Brazilian ensemble immersed in urban fusion-funk, step out of their native boundaries to prove that they can play from deep in the pocket, and do it well. Riding on the acclaim of his previous releases Samba Jazz (2012) and Leste (2015), trombonist Jorginho Neto plugged into the Herbie Hancock Headhunters mindset to create Harlem, an appreciation to a turning point in jazz.

The famous speech by Martin Luther King is enveloped by an extract of "Amazing Grace" in a prelude to the title track, shades of vintage soul jazz performed with a trombone and trumpet front line, defined by heavy funk. Pianist Gustavo Bugni's accurate Fender Rhodes articulations opens "Mr. Dave," Neto taking over, then giving it back to Bugni. The mysterious "777," has a underpinning of electronic synths as Bugni shows his skills on acoustic piano, leading to a searing solo by trumpeter Sidmar Vieira, who did his homework and knows how to make every note count. The astral trajectory of "Liberty," offers abundant space for both horns to take their time, depicting an aural panorama.

But not is all done in the groove lane, "On The Road," is a tranquil ballad that displays Neto's composiing maturity, encasing the song as a comprehensive missive from the band. In a nod to both Weather Report and the Headhunters, "Weather Hunter," is a urbanized bop laced adventure that drops into a mid-section fusion segment, showing that for all its flair and flash, fusion and funk has an indelible sense of swing.

Everything leads back to the roots, "Lord" exhibiting all the primordial traits that make this music so unique. They cover the sacred side of gospel, and cross the line into secular blues, drawing deeply from the well where everyone goes for inspiration. An honest testimonial from a Brazilian band that absorbed the elements and energy that made fusion a viable force in contemporary jazz.