By IAN PATTERSON
January 21, 2016
Sign in to view read count 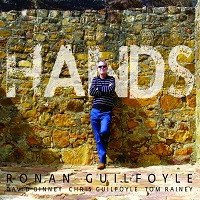 In a thirty-year career as a leader, Irish bassist Ronan Guilfoyle has built an international reputation as a rhythmically advanced musician and a sophisticated, challenging composer. From indo-jazz suites to contemporary classical music (composed and improvised) and from extended works inspired by the writings of Samuel Beckett and James Joyce to suites for jazz guitar trio and string quartet, Guilfoyle's music draws from a large and diverse vocabulary. His small jazz ensembles, however, often provide the setting for his most thrilling work, and the excellent Hands (Portmanteau, 2015) is no exception.

Recorded in two four-hour sessions in New York's Systems Two studios, there's a vibrancy about these seven originals that often stems from such an in-and-out, no-frills approach. Guilfoyle's compositional frames draw the best out of a stellar quartet whose collective chemistry is pronounced; Tom Rainey and Guilfoyle's intuitive play is the fruit of a twenty-year collaboration and their exploratory push-and-pull—mingled with wickedly unpredictable grooves—is the bedrock of the music. David Binney and Chris Guilfoyle —making his recording debut—also dovetail beautifully, sounding like two horns when addressing the melodic heads in unison, and weaving boldly in and out of each other's slipstreams with controlled attack.

The quartet lays down its marker with the sizzling post-bop of "In Fairness," where the quartet reins tighten and loosen in compelling patterns of through-composed and improvised play. Binney and Chris Guilfoyle stretch out either side of the catchy head—punctuated by a snickering saxophone motif—and deliver compelling solos, with Binney's thrust and edginess contrasting with Chris Guilfoyle's cleanly articulated, linear fluidity. "Close Call" follows a similarly knotty course, slipping from groove-based ensemble chant to Binney's ruminative solo improvisation and climaxing with feverish, interwoven saxophone and guitar lines.

Ronan Guilfoyle comes into his own with a lyrical unaccompanied solo on the intro to "Krystal," a dreamy ballad featuring a charming intervention from Binney who conjures longing and tenderness in equal measure. The quartet ratchets up the energy levels with the searing blues of "Nod"; Chris Guilfoyle tears out of the blocks in a fiery charge a little evocative of John McLaughlin, punctuated empathetically by Rainey. Fast walking bass underpins Binney's animated response on this rousing, bop-influenced set-closer.

The excellent musicianship makes Hands immediately accessible, yet the depth in Ronan Guilfoyle's compositions is gradually revealed on repeated listens, which the music surely warrants. It would be a shame if this exciting quartet was to remain a one-off studio venture, as it would surely go up yet another gear in the live arena. And that is a mouth-watering prospect indeed.