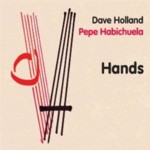 Centuries old, an accretion of musics absorbed by north Indian migrants as they travelled, one stream through the Balkans, the other through the Maghreb, towards their final desination in southern Spain, flamenco is not easy for a non-Gypsy convincingly to perform. Intricately codified, rich in lore and tradition, its broad mannerisms can be mimicked quickly enough, but to inhabit its soul, its cante jondo (deep song), takes much, much longer. Some would say a lifetime, more or less.

British bassist Dave Holland would probably be the first to deny he's any sort of flamenco master, but the truth is he's made a more than credible stab at the style on Hands, an elegant, lyrical, rhythmically spicy blend of jazz and flamenco in which flamenco gets top billing.

First, Holland chose well in his partners: the Habichuela family, whose extended clan have been revered flamenco guitarists for three generations, and whose progeny, some of them heard here, show every sign of continuing the family tradition. Further, third generation Pepe Habichuela, born in 1944 and a star of the music since the mid-1980s (flamenco stars aren't made overnight), is no stranger to jazz: he notched up successful collaborations with bassist Jaco Pastorius and multi-instrumentalist Don Cherry, who described his sound as like "a tree crying."

Second, Holland hasn't approached flamenco in the hit-and-run, cultural tourist mode adopted by so many of his British or American predecessors. Hands has been three years in the making, with Holland and Habichuela woodshedding and performing in Spain in 2007, 2008 and 2009, before recording the album in Madrid over four days in March 2009. Three years may not be a lifetime, but they prove to have been enough for Holland to get pretty deep under flamenco's skin.

Aside from two explicitly jazz-tinged Holland tunes—"The Whirling Dervish" and "Joyride," both of which do exactly what they say on the tin—the material here was all composed by Jose Antonio Carmona or Jose Miguel Carmona, and is foursquare in the Gypsy tradition. It ranges from flamenco's upbeat fandango, rumba and buleria forms (on "Hands," "El Ritmo Me Lleva" and "Puente Quebaro") all the way through to the deepest cante jondo with the seguiriya "Bailaor" and the solea "My Friend Dave." Solos by the leaders emerge organically out of the four strings/two percussion group, with no fanfare but plenty of flash and fire and, on occasion, affecting tenderness. Always, the music is intense and glowingly melodic.

In the sleeve notes, Habichuela writes, "We are now two Gypsies, or better yet still, he (Holland) is now a Gypsy, and I am almost an Englishman." Generosity of spirit permeates every minute of Hands, which is a joy from start to finish.