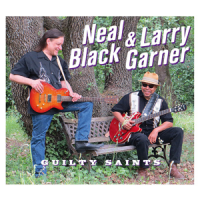 They're calling him the new king of the Voodoo blues. Unlike the old king, Screamin' Jay Hawkins, Neal Black is white. He's from Texas and plays high voltage boogie guitar but has also studied under jazz giants Herb Ellis and Barney Kessel. Perhaps his best known song to date is "Let Jesus or Johnny Walker take your hand," delivered in a hoarse growl that evokes the shade of Blind Willie Johnson, greatest of the Texas gospel shouters.

Real Blues magazine has called Larry Garner "one of the top five bluesmen on the planet." He's black, from Louisiana, learned to play the guitar as a boy, first by copying Jimmy Reed, then B. B. King and started out backing a Baton Rouge gospel group. His blues are in the mainstream, looking at life and love in no-nonsense, judgmental "Frankie and Johnny" fashion.

The French label DixieFrog had the bright idea of putting these two together and gave them the artistic freedom and support needed to produce a great album. It displays their individual talents to advantage while allowing something new and original to emerge from the collaboration.

The two of them are pictured smiling happily in the accompanying booklet, a rarity for Black who usually plays the part of Texas guitarslinger in publicity shots and videos, eyes looking right through you and out the other side, set in a stubble-chinned face carved from granite. French "bourgeois bohemians"—bobos for short—like their blues heroes to look like that.

Black's more relaxed here but there's still plenty of driving boogie guitar and knife-edge lyrics to keep them bobos satisfied. He sings "I can see a snake coming up the road from a country mile. Don't you high five me. Just slide on by with your plastic smile." That's from "A Friend Like You," written with Garner.

In his own "Saints Of New Orleans," he tells of "Baptist preachers getting high at the striptease show" and the mayor "dancing at Tipitinas with a Livingstone parish transvestite." Garner meanwhile sticks firmly to blues staples: life and love in "Guilty" and good old, finger-pointing illicit sex in "Back At It Again."

But, setting aside "Saints Of New Orleans" —by far and away the best track—it's the songs Black and Garner wrote together for the album that shine through. "You can put your faith in the man / And his cross high upon the steeple / But sometimes bad things happen to good people"—that's from "Bad Things, Good People."

This album has social comment and plain good rocking aplenty, plus dazzling vocal and instrumental interplay between two giants of the genre that words can't begin to describe.

God Today; Guilty; A Friend Like You; Saints Of New Orleans; Better Days; Do Not Stand At My Grave And Weep; Back At It Again; Bad Things, Good People; You Can’t Do It; Chances; Ride With Me; Neighbor, Neighbor.