Kinga: Guess Who I Saw Today 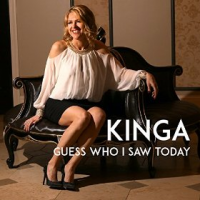 Born in Poland and eventually settling in Ottawa, Ontario, Canadian songstress Kinga reveals her debut recording Guess Who I Saw Today presenting a terrific selection of standards and reimagined classics produced and arranged by friend and pianist extraordinaire Bill King. Gifted with a dark crisp voice, Kinga's love for jazz was developed at an early age with the help of her father who performed in a jazz cabaret and her mom who played pop and jazz vocal recordings from the Platters, Tony Bennett and Frank Sinatra among others. For the singer, the most important thing about this first effort, is her emotional connection to each song representing the various experiences in her life from love, heartache to anger and happiness which she expresses so well here with a dynamic and powerful performance.

Aside from the obvious requirement of a having, as Sinatra often stated "a great set of pipes" for a vocalist to have a successful album, two other essential ingredients a recording should have are, a great repertoire of songs and a first rate supporting cast of players which thankfully, this debut has and more. On tap are exciting treatments of Duke Ellington's familiar "Mood Indigo," Mose Allison's swinging "Swingin' Machine" and "What's with You" along with interpretations of old classics not often found on a jazz album such as, Bill Withers' "Ain't No Sunshine" and the 1965 hit by The Animals "Don't Let Me Be Misunderstood."

There are so many wonderful tunes on this outing that it seems everyone is a keeper however, some shine more than others including the opening "It's Magic" with King on the piano, Duncan Hopkins on bass, Mark Kelso on drums, Rob Somerville on the trombone and saxophonist Mike Murley making superb contributions. Two other outstanding pieces here are unquestionably, the immortal "What A Difference a Day Made" where Kinga is simply at her best, and the warm and beautiful title track where the vocalist sings with emotion perhaps, reflecting one of those heartache moments in her life, a simply gorgeous performance.

Other notable songs here include "Bitter Earth," "I Must Have Left My Heart" and singer-songwriter Randy Newman's "I Think It's Going to Rain Today." As debut recordings go, this one is one of the finest around, an exceptional album from an exceptional young singer with gift for song. A soulful vocalist, Kinga makes quite an impression on Guess Who I Saw Today, a vocal album that blends jazz and pop music with taste and presents the best of ballads and swing with a touch of class, well done!

It's Magic; Ain't No Sunshine; What A Difference A Day Made; This Bitter Earth; Mood Indigo; I Think It's Going To Rain Today; Love Me Or Leave Me; Guess Who I Saw Today; Swingin' Machine; I Must Have Left My Heart; What's With You; Don't Let Me Be Misunderstood.