By BRUCE LINDSAY
October 23, 2014
Sign in to view read count 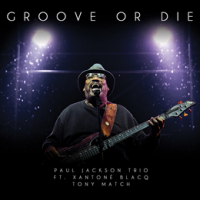 Groove Or Die. So says Paul Jackson, bassist extraordinaire. It's clear that the decision isn't one that's troubled Jackson, or fellow band members Xantone Blacq and French percussionist Tony Match, for too long—this album is all about the groove. Or, to be more specific, the grooves.

Jackson has been a first-call bassist for many years—a founding member of Herbie Hancock's Headhunters, a member of the rhythm sections of luminaries such as Stevie Wonder and George Benson. The trio is a relatively new combo, however: Groove Or Die is its debut recording.

The bassist establishes his manifesto on "Groove," exhorting everyone to "stay in a real groove." Match and Blacq respond immediately—keyboard, drums or bass, each one lays down its own irresistible line of funk. "Everything" takes the tempo down somewhat but the groove—especially Jackson's low-down bass growl—remains underneath Blacq's vocal. "Tiptoe Through The Ghetto" demands—deserves—a dancefloor response, Match's solid drums and Jackson's fluid, gritty, bass creating another killer groove.

"Pain" is a slow-burn ballad, built around Jackson's spacious but effective bass riff. His vocal is heartfelt, the lyric is as downbeat as the title suggests although repetition eventually diminishes its message somewhat. "People Cry" has a more positive vibe, both lyrically and musically. "Slick It," an instrumental, is upbeat, a workout for Blacq's electric keyboards—the mood carries on with the brief "Nuru." Blacq's lead vocal features on "What You're Talkin' 'Bout," his own composition—he's a silkier, subtler, vocalist than Jackson, whose own voice has a bluesier edge.

"Die" brings things to a close. Despite the title this is another groove-driven, though brief, instrumental that oozes good vibes. Maybe Jackson is suggesting that even this final act can be a celebration, as long as the groove is there. Groove Or Die offers plenty of grooves to choose, delivered by a masterful band.

Groove; Everything; Pain; Slick It; Nuru; What You're Talkin' 'Bout; Midnight Is A Lonely Heart; Tiptoe Through The Ghetto; People Cry; Die.