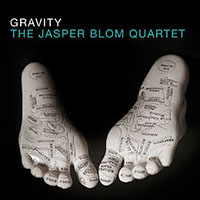 With Gravity, Dutch saxophonist Jasper Blom concludes his Mainland Records trilogy—its cover perhaps suggesting something more danceable than the heads and hands that graced the respective covers of 2008's Statue of Liberty and 2011's Dexterity. Each recording has its own charms, but Gravity is, hands-down, the most upbeat and joyous of the three, and another superb outing for a quartet fast approaching its sixth anniversary since first recording in June 2007.

Gravity gets off to a surprisingly rock-inflected start with "Britpop," as drummer Martijn Vink's muscular backbeat drives a quirky contrapuntal melody shared by Blom and guitarist Jesse van Ruller. A leader in his own right, whether Van Ruller's playing it clean and spare, as he does on his own The Ninth Planet (C-string, 2012)—from his appropriately named Chamber Tones Trio—or down and dirty, as he does here, his virtuosity, empathy and overall imagination and instincts may already be garnering a certain degree of international attention but, based on these recordings and live performances with Blom at Dutch Jazz & World Meeting 2010, and with Chamber Tones at the 2012 edition, he certainly deserves more. As does Blom—who, for the first time in the trilogy, isn't listed as employing effects, though the spacious sonic washes that run beneath Van Ruller's freewheeling solo on "Estrella Latina" suggest otherwise. Whether playing tenor or soprano, Blom's tone is sure, and his ability to navigate odd changes and weave through Van Ruller's heavily chorused voicings, all the while never losing sight of the tune's knotty structure, is as confident and engaging as it's ever been.

While Gravity is predominantly upbeat and hard-edged, Blom—who composed the entire trilogy barring a single tune on Dexterity—continues to demonstrate a broader purview on this dark-hued ballad. Lyrical and eminently hummable, its melody is, nevertheless, layered over a more sophisticated set of changes that, supported by Vink's brush work and bassist Frans van der Hoeven's spare but note-perfect choices, leaves plenty of space for both Blom and van der Hoeven, who takes a lengthy second solo that matches his leader's predilection, at least on this tune, for simplicity and elegance over excess virtuosity.

Gravity's biggest change, however, is the inclusion of wordless vocals on the Latinesque "The Jaive Song," another lyrical composition but with a much brighter complexion. Guest South African singer TuTu Puoane creates a virtual choir through overdubbing, but engages in some one-on-one interaction with Blom in the solo section, as well as throwing some additional percussion into the mix.

Blom returns to more jagged territory on "Road Rage," while "Folky" is a metrically shifting, harmonically challenging piece that sets the stage for the balladic "Life in a Day" and the hip hop-inflected "Angelocology (Payé, Payé, Paya)," featuring Blom's uncredited vocals and layers of horns and guitar to bring Gravity to a funkified close. It may be the end of the trilogy, but hopefully Blom will find a way to keep this quartet going, as the evolving chemistry, in particular on this final installment, would make it an absolute shame, were this group to disband now after accomplishing so much.