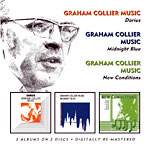 The benefit of hindsight reveals how the three LPs, recorded in the mid-1970s, collected here form the bridge between British bassist, composer and bandleader Graham Collier's early small group work and the expansion of tonal palette and compositional ambition that have marked his more recent forays. His music thus amounts to one of those occasions when increasing ambition is complimented by increasing creativity. Over the course of this collection, taken sequentially, that's readily apparent. Recorded during hardly the most creative time for improvised music in general, they also mark a true coming together of composer and musicians.

Collier has perhaps followed bandleader Duke Ellington's example in the degree to which he's stuck by certain soloists. Guitarist Ed Speight and trumpet / flugelhorn player Harry Beckett have always been highly empathetic in this regard and they are but a couple of the stalwarts plying their wares here. It might be argued that the six-piece band featured on both Darius and Midnight Blue is one of the best Collier has ever headed. "Darius Part Two" exemplifies a combination of lyricism and grace that hasn't always been an obvious strain of his music; Geoff Castle's deft touch on electric piano accompanying Derek Wadsworth's expansive trombone results in singular elegance.

It's clear too how Collier's ambition as a composer was starting to result in music that retained an underlying coherence for all of the in-the-moment reimagining it was subject to by his musicians. Collier the composer has habitually always sidestepped the obvious when it comes to harmonic movement too. It has been one of the ways in which he's kept musicians on their toes and "Darius Part Four" exemplifies this. It also benefits considerably from Beckett's combination of reflection and heat, while drummer John Webb, as alert to nuance as he always was, gets active when the music is transformed in the momentum of the moment.

The degree to which Midnight Blue isn't the son of Darius, given the same band lineup, is tribute to both Collier the composer and the musicians involved. On a superficial level the music is less reflective, as exemplified by the opening passage of "Midnight Blue" itself. Beckett, as has often been his way, hits a vein of invention that makes it sound as though he could go on forever, but such is the nature of the music that greater contrasts lay ahead. In a way not dissimilar to Beckett, Speight has always been a musician whose work is cliché free. He proves it again in his solo which, while it develops a momentum of its own, is the work of a man always alert to where Collier's musical framework is headed.

New Conditions is a particularly apposite title. As the last of this trio of album in terms of recording date, Collier is still playing bass but it's clear that his music's evolution is in a sense altering his own status within it. Even in the introduction, it's apparent that elements of the free are assuming a higher profile, but it's clear too that the way in which Collier is marshalling the larger ensemble heralds the music still to come, and not merely in terms of the overall conception of the album. The first and second parts, played without a break, are marked, at least at first, by an up-tempo passage which allows the trumpet section to burn before pianist Roger Dean gets moodily expansive.

The balance between soloist and setting in Collier's music has sometimes been one only precariously struck, but here the contrast between Webb's solo drums and the backing they receive offers an alternate view of tension and release. When Alan Wakeman and Art Themen get to duet on soprano saxophones they do so in a manner cognizant with the freedom on offer, and without resorting to aimless twittering. The spirits of saxophonist John Coltrane and drummer Elvin Jones are kept at bay, and not simply because this is music of a radically different order. The level of identity that implies is only too obvious throughout this program, and its reissue after a few decades is a cause for celebration.