By James Nadal
February 5, 2016
Sign in to view read count 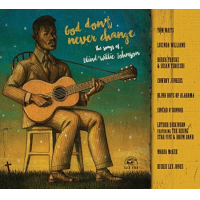 As time moves on and the genuine bluesmen slip into historical archives, it is a cause for celebration when someone makes the effort to reconstruct the music of one of the true innovators in the blues genre. Produced by Jeffrey Gaskill, God Don't Never Change: The Songs Of Blind Willie Johnson, is a contemporary tribute to this seminal slide guitarist who was also unique in his imaginative vocal interpretations and compositions of gospel blues. Blind Willie Johnson (1897-1945) recorded thirty tracks for the Columbia label between 1927 and 1930 in sessions done in Dallas, New Orleans and Atlanta, preceding the heralded recordings of blues guitarist/composer Robert Johnson in San Antonio, by nine years. Though his songs have not had the influence and impact of Robert, Blind Willie has left an enduring legacy which is carried on by modern slide guitarists and gospel singers.

It is of course the job of the producer to get the right people for such an undertaking, and this project is no exception. Tom Waits opens with "The Soul of a Man," a raucous holy roller that brings to mind the fire and brimstone preachers who know how to shake up the congregation. "Nobody's Fault But Mine," possibly Johnson's best known and most covered song is given the royal treatment by Lucinda Williams, who possesses one of the most distinctive voices in music. Derek Trucks is widely recognized as a brilliant slide player, and he is joined by his wife Susan Tedeschi handling the vocals on "Keep Your Lamp Trimmed And Burning," which eases into "Jesus Is Coming Soon," by the Cowboy Junkies. The Blind Boys of Alabama, were the obvious choice for "Motherless Children Have A Hard Time," and they deliver a soul shaking rendition.

Sinead O'Connor might be the surprise artist here, but she rises to the occasion on "Trouble Will Soon Be Over," followed by Luther Dickinson, guitarist of the North Mississippi All Stars who assembled an interesting fife and drum band to perform "Bye and Bye, I'm Going to See the King." Lucinda Williams returns for an inspirational version of "God Don't Ever Change," and Tom Waits does an encore with "John The Revelator." Maria McKee raises the roof with "Let Your Light Shine On Me, and Ricki Lee Jones closes the repertoire with the somber toned "Dark Was the Night, Cold Was the Ground." This final song was initially done by Johnson as a moaning hymn accompanying himself on an eerie slide guitar, Jones accomplishes an impressive take and does justice to the memory of the original.

This is an interesting record, and one that was literally years in the making, as producer Jeffrey Gaskill, back in 2002, began the search for the legend of Blind Willie Johnson, going back to his native Texas roots to get the real story. Though the recordings of Johnson are readily available and have been reissued on various labels, this compilation is a labor of love in not only recognizing a unique American artist, but serves as stimulation to go check out Johnson's music. The blues is where it all began and these primordial performers deserve enduring appreciation for their contribution.

Soul of a Man; It’s Nobody’s Fault But Mine; Keep Your Lamp Trimmed and Burning; Jesus is Coming Soon; Motherless Children Have a Hard Time; Trouble Will Soon Be Over; Bye and Bye I’m Going to See the King; God Don't Never Change; John The Revelator; Let Your Light Shine on Me; Dark Was the Night, Cold Was the Ground.