By NENAD GEORGIEVSKI
August 20, 2013
Sign in to view read count 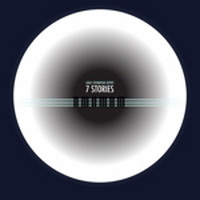 It seems that number seven is a universally accepted lucky or holy number in most cultures from west to east. And there appear to be many places where the number seven can be found, including the seven wonders of the world, the seven seas, the seven virtues and the seven colors of the spectrum; add to that list drummer Goce Stevkovski's debut, 7 Stories.

Much like his colleague Manu Katche, Stevkovski is a much sought-after session and live drummer. Although both share no stylistic common points, both artists did forge reputations working for notable artists in different genres before embarking on their own successful careers.

Stevkovski's skill as a band leader might not be as well-known as his tenure with high profile groups like the Bodan Arsovski Ezgija band, Arhangel, Leb I Sol, Project Zlust, DNO or various small-group jazz projects. On this record, however, the drummer has managed an impressive feat by enticing some young horn gunslingers into his front line—trumpeter Trajče Velkov and saxophonists Kire Kuzmanov and Ivan Ivanov—working shoulder to shoulder with elder musicians such as trombonist Saško Nikolovski, keyboardist Damir Imeri and bassist Aleksandar Ikonomov. 7 Stories is another case of a potent cocktail combining youthful vigor and talent with seasoned veterans into an integrated and impressive whole.

In Chinese culture, the number seven also symbolizes togetherness, and there is a palpable sense of joyful camaraderie amongst Stevkovski's band members. The result combines the close-knit feel of a small unit with the power and variety of a big band.

Stevkovski is the author of all of the compositions, but his pieces certainly don't reveal a dominant personality. One of his chief characteristics is the rhythmic understanding he has for any given surrounding or situation, always applying his skill to appropriate measures. As someone who has never had much taste for the farther reaches of jazz experimentation, he is far more intent on building restrained patterns and maintaining a level head.

7 Stories is a rare accomplishment: a post-hard bop album with strong and memorably singable melodies, its beautiful moments striking a perfect balance between flash and subtlety without trying too hard to impress with instrumental virtuosity. Over seven tracks that mix an almost Miles Davis second quintet-like density of sound with languid funk and playful horn harmonies, the band cooks. The tunes are deceptively simple, but close listening finds the great effort that went into making them seem so effortless.

The compositions are arranged with absorbing big band-like textures and attention to detail, and on top of that Stevkovski plays to the strengths of the individual band members, allowing each of them space to showcase their personalities. The opening title track is top shelf, featuring the whole band delivering its A-game. A couple of moments into the track, Stevkovski unfolds a dreamy quilt of individualistic cymbal splashes, gently propelling the music forward in conjunction with Ikonomov's purring double bass. It is not swing in the traditional sense, but is, as ever, highly melodic and a good introduction to the band's individual voices.

There really isn't a spare or slack moment on the set, but as the band takes it out with the progressive post-bop of "7 Rivers," it is clear to see how finely wrought this ensemble is, anticipating each other even in the studio. "7 Rivers" goes up and down, with Ikonomov's bass demonstrating bounce, vitality and perfect tone, while the brass section once more displays its talents—not only as fine soloists but also as excellent ensemble players, carrying their chairs with authority and verve.

"7 Days" shows Stevkovski's more adventurous side, starting with Velkov's trumpet battle call and moving at a relaxed tempo with tough solos by Velkov and Nikolovski as it builds with inevitable intensity and grandeur, eventually climaxing into a swaggering swing and wild call-and-response exchanges. The buoyant "7 Dwarfs'" is the album's sexiest tune, evolving from a slow, funky bass line where the horn section's sultry lines and Imeri's keyboards add tasteful flourishes above Ikonomov's walking bass—a typical swagger with a shuffling groove. The frisky bop of "7 Wonders" relies on Stevkovski's instrumental daring, making it something more than a retread of familiar ground.

The closing "7 Mountains" is a beautiful and tender ballad, its emotional mood one of tenderness, with a late night feel, with moments where Imeri dovetails with Kuzmanov, whose playing is old-school soulful.

Superstition aside, the septet has done a marvelous job. In a set filled with a wide range of sub-genres and dynamics, Stevkovski shows the sublime musicality of his world-class band. Groups of this size are hard to sustain, but hopefully Stevkovski's vision will help this one thrive; this is a unit that should keep evolving.