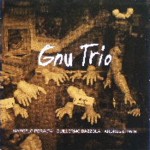 True to its homophonic name, the Gnu Trio offers an ever-evolving musical canvas on its self-titled debut release. Often further minimizing the trio format to duet (with the odd man out supplying the occasional, well-placed accent), the group nevertheless produces an expansive sound that traces the hills and valleys of modern music. Moving organically from the mournful to the exultant, through melodic and free progressions, the three Argentinean madrileños remain in touch with musical traditions the world over, while contemporaneously pressing them into something new.

Saxophonist Marcelo Peralta favors the experimental jumps of modern masters like Ornette Coleman and Dewey Redman, the latter to whom the trio pays tribute with the record's opening number, "Blues for Dewey." But he's equally at home with straight-ahead R&B (as featured in "Sopa de Almeja" and "Gnu Stomp") and in using his horn to supply Moorish, chordal-sounding support for his mates. "El Vidalero" finds Peralta running the gamut, opening with a free-jazz volley that falls into a dark Spanish mourn before giving way to cello-like strokes behind guitarist Guillermo Bazzola's deep-noted solo.

Like the flip side of a spinning coin, Bazzola echoes the saxophonist's range throughout the record. He plucks reverberating blues lines on the opening track, rocks with the fuzz and grit of a Nels Cline or John Scofield on "There's a Bone In My Tea" and strums his own cello tones on the appropriately expansive "Un Poco Mas de Tiempo."

And the trio's youngest member, drummer Andres Litwin, proves himself every bit the equal of his elders. While not featured in a lead, solo light, his drumming is never a sideshow. It relates intricately with the others in the thundering, multidimensional mode of Elvin Jones—the tank of a cowbell or rattle of sleigh bells expanding the palette of a true frontline instrumentalist, not simply a backer.

The depth and constant flow of meaningful interplay on this sparse gem of a record make it a keeper. The Gnu Trio prances a musical savanna, capturing the entire expanse of beauty through the players' personal, imaginative leaps through the space.