By Ian Patterson
April 5, 2020
Sign in to view read count 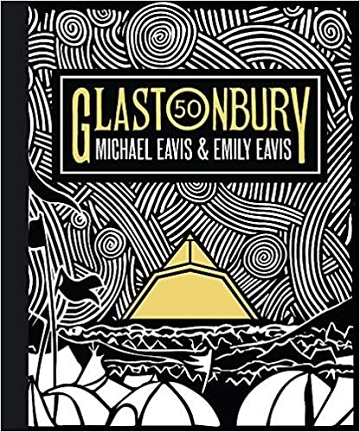 Published in time for Christmas 2019, Glastonbury 50 was intended as part of the build up to the legendary festival's 50th anniversary in 2020. That was before COVID-19 changed everything. Glastonbury 2020 was cancelled, with the official 50th anniversary celebrations postponed until 2021. For those pining for Glastonbury in this enforced fallow year, this book should provide more than a few crumbs of comfort.

For Glastonbury veterans, this beautifully illustrated history will revive a host of cherished memories. For those who have never been, the sumptuous photographs and extraordinary tales will likely fuel the desire to pack a tent, wellies, and other assorted essentials, and make the pilgrimage to Worthy Farm, Somerset.

In a series of candid essays, festival founder Michael Eavis and his daughter—and Glastonbury co-director—Emily Eavis relate the key developments in Glastonbury's storied history. The early years, the challenges that came with the festival's enormous growth in the 1980s, the many setbacks and innumerable highlights -all are addressed with confessional openness.

Personal contributions from musicians and journalists provide other perspectives of the festival, that when taken together, paint not only a vivid portrait of Glastonbury's many fields, stages and heady atmospheres, but also of how Britain has evolved socio-politically in the same period.

From the first Glastonbury in 1970, where two thousand people paid £1 to see Marc Bolan headline a one-day event that included a roasted ox and free milk, to the 2019 edition, where over two hundred thousand paid £248 for a five-day extravaganza featuring over a thousand acts, Glastonbury has become arguably the most famous music and arts festival in the world, with tickets selling out in a matter of minutes, months before the acts are even announced.

It's been a roller coaster ride for the Eavis family, and not always a smooth one. The debts following the 1971 free festival—the first year to feature Glastonbury's famous Pyramid Stage, designed by Bill Harkin—meant that it would be another eight years before the festival was held again. Even then, in 1979, Michael Eavis had to hand over the deeds of the family dairy farm to the bank as insurance.

Money concerns haven't been the only source of headaches to the organizers: the opposition—sometimes threatening—of locals to the festival; the growing drug culture of the 1980s, which saw shoot-outs between rival dealers; clashes between police and the Travellers; a serious post-festival riot in 1990; the burning down of the Pyramid Stage in 1994. Never a dull moment on Worthy Farm.

Some of the challenges have threatened Glastonbury's continued existence, and Michael Eavis describes his repeated battles with the local council to renew the festival's license. Refused a music licence in 1990, Eavis cleverly rebranded the festival and duly obtained a licence for a festival of "contemporary performing arts" by placing French alternative circus troupe Archaos on the Pyramid Stage. Who will forget the sight of Archaos motorcyclists racing up and down the side of the Pyramid, or of chainsaw juggling? Cirque de Caractère, indeed.

Of course, Glastonbury has always meant much more than just music. Circus, theatre, cabaret, talks, comedy, cinema and alternative ideas have been an important part of the festival's DNA from its infancy. Fantastic sculptures and brilliant artwork are everywhere. As more than one festival goer in these pages attest, it is possible to have an amazing Glastonbury without seeing any music at all. Tantric sex therapy anyone?

Michael Eavis credits his Methodist background for his strong sense of social responsibility. This has translated into philanthropy that has seen tens of millions of Glastonbury pounds donated to local and international charities. In the early 1980s, as the international nuclear arms race gathered pace, Glastonbury backed CND (Campaign for Nuclear Disarmament). In later years Greenpeace, Oxfam, Water Aid and Children's World Charity have been the major beneficiaries of Glastonbury's success.

Thanks to its financial leverage Glastonbury has funded a significant social housing project in the local town of Pilton, on land donated by Michael Eavis. "I felt it was my mission...," relates the 84-year-old festival founder, in what he saw as a necessary response to the selling off all the council houses in the 1980s, on Prime Minister Margaret Thatcher's watch. It is, without a doubt, Glastonbury's greatest legacy for the local community, and one in which Michael Eavis seems to take greatest pride.

A keen socio-political edge has always been part of the Glastonbury ethos, and over the years the Pyramid Stage has welcomed speakers as diverse as the Dalai Lama, New Age free-thinker Sir George Trevelyan, CND leader Bruce Kent, Labour's Jeremy Corbyn, and, to a rapturous reception, the 92-year-old natural historian and environmentalist extraordinaire, Sir David Attenborough. Glastonbury practices what it preaches, too, with a major recycling programme and the ban of all single-use plastic bottles, which meant one million fewer in 2019.

To think that Glastonbury might well have come to an end in 2000, when Michael and his wife Jean Eavis had planned to retire the festival for a return to an exclusively farming life. The death of Jean in 1999 was, in fact, a turning point, as Michael and Emily decided to continue the festival in her honor. It could still have collapsed around them as 2000 saw massive overcrowding, and with it, Michael Eavis admits, "more crimes, more drugs, and of course, more arrests."

The answer was the construction of the controversial super-fence—a three-and a-half-metre high, steel wall that ringed the festival site. Regular Glastonbury gate- crashers were appalled.

In the past, hordes had found numerous ways to gain free entry, by tunnelling under the relatively flimsy fences or by climbing, pole-vaulting and trampolining over them. One guy famously parachuted into Glastonbury. The new, one million-pound steel fence deterred most, including the rather determined folk who rolled cars and trucks down a hill in a futile attempt to smash their way through. With the new security fence, and the experienced Mean Fiddler organisation now handling logistics and security, Glastonbury was safer, which assuaged the local council's fears and ensured the festival's long-term future.

Working with the right creative personalities, and establishing trust, Michael and Emily agree, has been one of the keys to Glastonbury's artistic growth. When it comes to human resources there have been some remarkable continuities: Liz Eliot has run the Green Field since 1984; Malcom Haynes has been Dance Village Programmer since 1990; while Arabella Churchill, who founded the Children's Area, ran the Theatre and Circus Fields from 1979 until her death in 2007.

Like any institution of fifty years standing, Glastonbury has evolved over the years. If dance culture and Brit Pop brought new audiences to Glastonbury in the 1990s, then the introduction of live television broadcasts, first by Channel 4, and since 1997 by the BBC, has brought Glastonbury to vast new audiences -20 million viewers in 2019.

The festival's posters show that most major artists of the last fifty years have played at Glastonbury, and where else in the world could you find Burt Bacharach, Pussy Riot and the Dalai Lama on the same bill? But as many voices in this book attest, some of the best music is often stumbled upon in some field or other, at any hour of the day or night, where an unknown band simply blows you away.

The first-person narratives gathered here provide up-close and just occasionally romanticized visions of Glastonbury. It is the book's stunning photographs, however, that best evoke Glastonbury's magic. A riot of brilliant images tells of sun-baked euphoria and rain-drenched quagmire, dawn choruses at the Stone Circle, 24-hour revelry and paganistic ritual, children at play, wildly imaginative arts and crafts. A two-pager of the site taken from space reveals a tented city bigger than Oxford or Bath.

The photos reveal that the vast sprawl of Glastonbury is home to the anarchic and the utopian, the disenfranchised and the politically committed. Child and family- friendly, it also harbours X-rated corners that draw bohemians of every variety. Glastonbury, for one hedonistic weekend each year, is home to people from all walks of life, bound by their appreciation of music and the arts, and simply of having a good time.

The love and attention to detail that has clearly gone into Glastonbury 50 mirrors the spirit of this unique festival. A wonderful tome that, like Glastonbury itself, captivates, uplifts and fires the imagination.