Joe Beck: Get Me Joe Beck 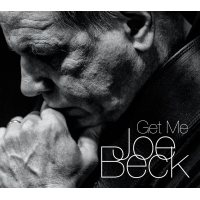 It would be something of an understatement to say that the late Joe Beck was a fine guitarist. In truth, he was one of the most multifaceted players to wield the instrument during his lifetime. Beck was hailed for his funky fusion work, both as an individual and in combination with saxophonist David Sanborn, he was an ace studio musician, working with everybody from Miles Davis to Paul Simon to Gloria Gaynor, and he was a brilliant and daring interpreter of standards. It's that last aspect of his playing that shines brightly on this posthumously released live date.

If this is truly Beck's final recording, it's a great way to cap a recording career. This album was recorded in 2006, two years before lung cancer took his life, and it's a shame that it took this long for it to reach the marketplace; it's a beauty, and one that almost never came to be. Anna de Leon, the proprietor of Anna's Jazz Island in Berkeley, California, had Beck at her club for two nights in September of 2006. Beck asked her to pick out a rhythm section, which is always a risky proposition, but she obliged. Little did anybody know that the combination of Beck, bassist Peter Barshay, and drummer David Rokeach would turn out to be such a winning combination. After the first night, de Leon realized that this music was too good not to preserve, so she arranged to have night two recorded.

It's really hard to fathom that these three men had no history together prior to those two nights. All parties combine sensitivity and a daredevil attitude to create something special. Hearing the way Beck and Barshay dovetail and overlap on "Stella By Starlight," for example, is hearing, to quote writer Whitney Balliett, "the sound of surprise." Other highlights include a not-too-tender "Tenderly," "You And The Night And The Music," and a "Manha De Carnaval" for the ages.

Beck and company are respectful of the music, but never excessively reverential. These men are willing to go off on tangents a bit, making these oft-performed pieces that much more interesting. Almost every number starts off with a Beck introduction, alone worth the price of admission. What follows—fluid chordal pathways, unexpected harmonics, ripping single note lines, swinging passages, and quiet scenarios—is the real show. Bits of banter are interspersed throughout the album, giving Beck a chance to share recollections of Antonio Carlos Jobim, praise his musical partners of the moment, discuss drinking, and liken the guitar to a six-piece band.

Anna de Leon's instincts about these Beck shows were spot-on; it's a shame that night one never got recorded, but it's a good thing night two was preserved for posterity. Beck may be gone, but he still has much to offer.