Home » Jazz Articles » Paul Giallorenzo: Get In To Go Out 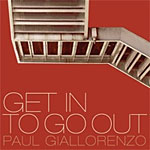 The 15th album in 482 Records' Document Chicago Series, Get In To Go Out is the debut of pianist Paul Giallorenzo's quintet. One of the few free-leaning pianists working in the Windy City's vital new music scene, Giallorenzo's angular approach towards writing and improvising draws inspiration from the seminal Post-War innovations of such pianists as Thelonious Monk, Herbie Nichols, and early Cecil Taylor.

As co-founder and director of the creative non-profit Elastic Arts, Giallorenzo entertains a range of projects, including an electro-acoustic improvising trio (Breakaway), a synth-pop duo (The Telegraph Series), and a traditional piano trio with bassist Ingebrigt Haker Flaten and drummer Tim Daisy, as well as numerous sideman duties and collaborative projects, ranging from film scores to sound installations.

Exploring the fine line between inside and outside jazz traditions, Giallorenzo's quintet features some of Chicago's most in-demand players, including saxophonist Dave Rempis, cornetist Josh Berman, bassist Anton Hatwich, and drummer Frank Rosaly. As befits the album's title, the group treads a razor's edge between traditional structures and unfettered freedom, updating the rough and ragged edges of Monk's soulful Riverside dates and Taylor's thorny Blue Note sessions with a pithy modernistic sheen.

The leader's deft touch and abstruse lyricism invokes Monk's rarefied sense of melody, with a boisterous attack similar to Taylor's efforts of the late 1950s. At his most contemplative, Giallorenzo's dulcet filigrees ebb with a silvery sheen, as on "Porous (for Quintet)," while the spiky, staccato bursts of "Vacillation" find him at his most assertive.

A winning document of the developing Chicago scene, Get In To Go Out is a promising debut from a talented new voice.