By DAN MCCLENAGHAN
April 24, 2017
Sign in to view read count 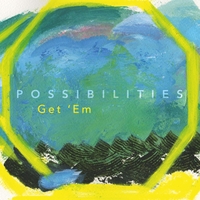 The saxophone/bass/drums grouping—at one time a rarity—seems to be undergoing a renewal of sorts. Drummer Rudy Royston offered up a fine example of the genre with Rise Of Orion (Greenleaf Music, 2016). Saxophonist JD Allen dove deep into the blues on Americana (Savant Records, 2016), and sax man Jason Rigby presented a breakout effort on the marvelous One (Fresh Sound New Talent, 2016).

Now it's the group Possibilities' turn, with Get 'Em.

Saxophonist Tim Bennett can be tagged the front man, as the writer of six out of seven of the disc's compositions, though the group's approach to making music is egalitarian. Bennett and his bandmates—drummer Peter Manheim and bassist Dan Stein—all studied at Oberlin Conservatory, with Stein thereafter attending Juilliard for his Masters and Manheim pursuing further studies in Brazil. So foundations are strong. But the music is far from academic.

From the opening notes of "Vibin,'" the sound had a fluid, organic feeling. Bennett's saxophone style is pure, vibrato-less, in the fashion of Stan Getz or Mark Turner. He plays the straight story line of the tales; Stein and Manheim supply ambient turbulence, the storm clouds rumbling on the horizon of a pastoral landscape.

"Band Aids" finds Bennett blowing cool over a metronomic rhythm that expands and contracts, moving the initial tranquility and injecting an slightly ominous vibe. These are laid back sounds, underlain with a covert intensity that bursts forth on occasion, then settles back into the groove.

Pure Imagination," the one non-Bennett original in the set, feels like a soundtrack to a movie scene featuring a protagonist sidling along a dark hallway, searching for the supernatural, and ultimately not finding it. The closer, "Studio B," bops, wrapping up this flowing and cohesive, cool-toned trio outing.

Vibin'; Band Aids; Up And In; Endless Grace; Get 'Em; Pure Imagination; Studio B.