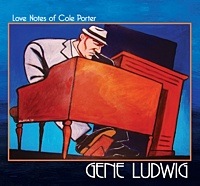 Nearly two years prior to his untimely death in July of 2010, Pittsburgh organist Gene Ludwig recorded this tribute to composer Cole Porter. Thanks to the efforts of Ludwig's wife and the folks at Big O Records, Ludwig's final recording is now seeing the light of day. Coming off of the stellar Duff's Blues (18th & Vine, 2008), a date featuring Bill Warfield's big band, Love Notes Of Cole Porter finds Ludwig exploring the Porter oeuvre within the confines of a smaller ensemble.

When releasing an album of songs by a composer of Porter's stature, an artist risks falling victim to over-familiarity. Ludwig overcomes that risk by mixing in lesser-known songs such as "Rosalie," "Dream Dancing" and "Why Can't You Behave?." Ludwig also adds variety by changing up the personnel, with half of the album's tracks featuring Ludwig in an organ / guitar / drums setting, and the other half adding the tenor saxophone of fellow Pittsburgh stalwart Lou Stellute.

While Love Notes Of Cole Porter avoids over-familiarity, that is not to say that it eschews the songs that made Porter famous. Ludwig and company tackle such standards as "What Is This Thing Called Love," "You'd Be So Nice to Come Home To" and "Night and Day," among others.

The crack band of saxophonist Lou Stellute, guitarist Mark Strickland and either Thomas Wendt or Billy Kuhn on drums does both Cole Porter and the memory of Gene Ludwig justice. In his often raucous solos, Stellute recalls Pittsburgh native Stanley Turrentine, making one wonder whether there is a Pittsburgh school of saxophone. Mark Strickland, in his single-note directness and use of octaves, makes one think of Grant Green and Wes Montgomery, who were themselves no strangers to organ groups. Although they share more of a supporting role, drummers Thomas Wendt and Billy Kuhn each work to lay a solid foundation of crisply swinging drums.

Throughout this well-recorded album, Ludwig coaxes a variety of tones out of his Hammond C-3, whether driving an up-tempo number, massaging a ballad or laying down a blanket underneath one of his band mate's solos. As an example of Ludwig's comping, note his work behind Strickland on a beguiling, Latinized "Begin the Beguine," one of the album's many highlights. On "You'd Be So Nice To Come Home To," Ludwig builds up a healthy amount of steam before briefly trading lines with Stellute and Strickland. The achingly beautiful "Every Time We Say Goodbye," with Strickland carrying the melody, is made even more poignant by the knowledge that this was to be Ludwig's final album, and, as such, is a bittersweet "Goodbye."

Ludwig lends "Why Can't You Behave?" a church vibe, converting anyone who doesn't already belong to the church of melodic jazz organ. Ludwig quickly travels back in time from Sunday morning service to his own Saturday night sermon, bringing his irresistible groove to "Night And Day," a title that sums up the difference in the consecutive tracks' respective moods.

Throughout the recording, Ludwig also demonstrates a firm grasp of jazz history. On "What Is This Thing Called Love?," Ludwig deftly inserts a quote from Tadd Dameron's "Hot House," a bebop era composition based on the earlier Porter tune. On "Rosalie," Ludwig employs an organ sound that harkens back to the early jazz organ of Fats Waller. One of Ludwig's inspirations, Jimmy Smith, similarly emulated Fats Waller on his own Plays Fats Waller (Blue Note, 1962).

Tracks: What Is This Thing Called Love; Everything I Love; I Love You; Begin The Beguine; You'd Be So Nice to Come Home To; Every Time We Say Goodbye; Rosalie; Why Can't You Behave?; Night and Day; Dream Dancing.

What Is This Thing Called Love; Everything I Love; I Love You; Begin the Beguine; You'd Be So Nice to Come Home to; Every Time We Say Goodbye; Rosalie; Why Can't You Behave?; Night and Day; Dream Dancing