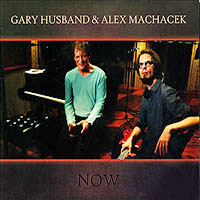 Over the course of the past decade or so, Abstract Logix has gone from being a web-based shop front for all things fusion—and that's fusion in the true sense of the word, by the way; not just the high octane, often pyrotechnic genre it's narrowed down to over the decades—into a record label with a small but significant discography whose roster includes everyone from Jimmy Herring and Wayne Krantz to Lenny White and John McLaughlin. It made its next inevitable step in 2010, when it hosted the New Universe Music Festival, in its home based of Raleigh, NC—a high-powered two-day celebration of its current roster. But beyond the performances themselves, New Universe was also a tremendous hang, where musicians who'd never met before had the chance to hear each other play and get to know each other.

The inevitable consequence of that hang was new collaboration, and nowhere was this more evident than on Gary Husband's two-volume Dirty & Beautiful series, released in 2010 and 2012, where the drummer/keyboardist collaborated with a bevy of musicians. Amongst them was guitarist Alex Machacek, whose own Abstract Logix discography—starting with his impressive 2006 debut, [sic], through to 2012's FAT—revealed not just a guitarist of note, but a composer capable of mind-bending complexity and almost unparalleled sophistication.

But while Husband is certainly capable of knotty compositional constructs, he has also proven increasingly capable of deep, in the moment spontaneity, in particular on his two remarkable solo piano outings, pre-Abstract Logix: Alternity Records' 2006 release, A Meeting of Spirits —interpretations of the music of John McLaughlin, with whom the keyboardist/drummer would ultimately collaborate in the legendary guitarist's 4th Dimension band—and The Things I See (2001, reissued Angel Air, 2004), inspired by the music of Allan Holdsworth, another legendary guitarist and Husband collaborator over the past three decades.

Husband's track with Machacek on Dirty & Beautiful Volume 2 was so successful that it seemed only a matter of time before the two would collaborate again, and Now is the result. But unlike their previous meeting, where Husband played drums to Machacek's layered electric guitar and programming, Now—instigated by Abstract Logix label head Souvik Dutta—is something else entirely: an intimate, largely acoustic duo recording where Husband contributes five compositions to Machacek's four, and the emphasis is on a blend of compositional acumen and improvisational élan.

While the compositions from both artists blend seamlessly into a cohesive whole, it's generally easy to distinguish their writing, although there are cases where it's less than obvious. Machacek's "Austrian Bluegrass" begins with a two-chord motif that's more closely aligned with a recognizable jazz tradition—something unusual in itself for the Austrian-born, now Los Angeles-resident guitarist—but its main theme, short though it may be, is pure, idiosyncratic Machacek. Still, it's a rare instance where the guitarist has written a "head-solo-head" composition, rather than one filled with knotty themes and episodic shifts. While there's little to actually align it from a harmonic perspective, the warm tone of Machacek's guitar and Husband's integral improvisational flights and accompaniment—at first, using the body of his piano as a percussion instrument to bolster Machacek's pedal tone-based solo, then moving to the keys to create harmonic motion for the guitarist's shift to a more linear approach—feel somehow aligned to the form-meets-freedom aesthetic of John Abercrombie's '70s/'80s duo with Ralph Towner.

"BlaBlaBla" is another matter entirely. Filled with stops and starts—and three-chord motifs that rhythmically reflect the song's title—it's a more oblique piece of writing, its dynamics gradually building with the guitarist's increasingly labyrinthine melody as it leads to a middle section where form seems to be dispensed with entirely. Husband and Machacek engage in some flat-out free play, their particularly impressive in-tandem work a combination of Husband's exploitation of his instrument's entire range with a stronger touch and more dramatic flourishes, while Machacek keeps up with a juxtaposition of volume pedal swells and more rapid-fire lines.

If Now reflects both players' clear upbringing in the jazz tradition, the music they play—and the way that they play it—is more often than not distanced from it, subsumed into something more personal. Husband's "Bing of the Vale" is one inevitable consequence, its lines possessing an unmistakable sense of swing, even if they're more melodically abstract, with Machacek running above and below the pianist, player each occasionally shifting to chords to allow the other a brief moment as the primary melodist, but all ultimately revolving around two-chord motifs that provide both with plenty of moving space. Machacek supports Husband's solo with some remarkably closed voicings, the pianist returning the favor during the guitarist's equally virtuosic solo with some rhythm-heavy block chords that make it completely understandable why it's not uncommon to find drummers doubling as pianists (Jack DeJohnette) and vice versa (George Colligan).

While this is a largely acoustic session, Machacek injects the occasional technological tinge, like the burbling electronics beneath the opening of his "Gaggia" or, on the same track, the appearance of some ethereal landscapes in the weeds at the end of his solo, leading to Husband's initially delicate but ultimately more percussive turn.

But if Now might appear to be a headier date, two of Husband's compositions, in particular, demonstrate a more lyrical side to this deeply connected duo. "Forever and Beyond" may possess hints of darkness, but so, too, does it travel to more beautiful terrain, Husband's a cappella intro a paradoxical combination of the two. Machacek demonstrates, in his solo, a capacity for sparer elegance, while Husband's solo—one of his best of the set—is a jazz lesson in a nutshell, and the only proof required to support his position as John McLaughlin's only constant companion in the now eight-year history of the 4th Dimension, last heard on Now Here This (Abstract Logix, 2012).

The album closer, Husband's "Spring Song," is positively and unashamedly beautiful, start to finish. With Machacek switching to finger-picked acoustic guitar, it's a folkloric ending that combines harmonic sophistication with more straightforward majesty; even more redolent of the Abercrombie/Towner axis, it's one of the most striking compositions Husband has ever written, and one which will hopefully become a regular part of his repertoire, irrespective of context.

While the naked intimacy and vulnerability of playing duo in the moment is not new to Husband, having taken those qualities even further on his solo piano outings, it is new for Machacek, who often labors long and hard in both the recording and post-production processes. Recorded over just three days, Now presents a completely different side to Machacek's most individual voice, while Husband continues to evolve as a writer and pianist of significance. An anomaly in both artists' catalogues, Husband and Machacek's unfettered interplay and utterly exposed sense of purpose, as well as their considerable strength and sophistication—both as composers and consistently exhilarating performers—is hopefully just the beginning of a long and fruitful musical friendship.