By JOAN GAYLORD
August 19, 2013
Sign in to view read count
"This is folk music. It is good that we have it in the schools, but we need to get it back more into the street—that's where it came from." 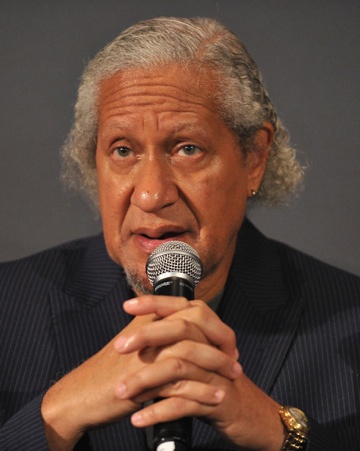 When saxophonist Gary Bartz is not headlining his own band or touring with McCoy Tyner, he is a professor in the Jazz Studies department of the Oberlin Conservatory of Music. His students are among the most talented and best prepared musicians of their generation. However, Bartz is convinced their training has been "backwards."

"My students come in and they can't listen because their first (music) education was reading," he shares. "That's backwards! Your ear is the most important thing in music and you have to start by really listening."

Sitting on a stool in his kitchen, Bartz shared his concerns about the state of jazz education and the development of the next generation of musicians, an approach that he believes has students spending too much time receiving instruction and not enough time really hearing the music. Hence, his wish to get music out of the classroom and back into the streets more where young people will learn it the same way they learned to talk. Music, he points out, is a language, one he thinks we should learn from a young age.

Each semester, for more than 10 years, Bartz finds new ways to "open their ears" and press his Oberlin students to truly hear the music they think they know so well. He admits the approach usually frustrates them because it forces them back into the role of a beginner, something most of them have not experienced for a long time. But Bartz is convinced this step is essential to their growth as musicians.

Most of his students, both at Oberlin as well as the occasional private student he sees, have usually learned the Real Books version of songs. Bartz says he doesn't even consider that to be an acceptable starting point because students are learning someone else's version of a composition rather than listening and figuring it out for themselves.

Bartz demands more. He expects his students to approach the music with the same commitment he does. When learning a tune, he says he takes it apart line by line and transcribes it himself. He locates the composer's authorized arrangement to discover what the composer preferred. He then may listen to other versions to see how various musicians have approached the composition. He also researches where the song came from. Was it part of a Broadway show? A film score? Who sang it? Was it sung by a man or a woman? What are the lyrics?

"I want to know everything about the song."

This intensive study is the approach he learned when he was in school and he says it continues to serve him well. Bartz attended Juilliard as a composition major where he studied the works of Beethoven and Mozart.

However, his early music education, the training that really developed his ear, came long before he started school. He came by listening to his uncle's record collection.

"One day, when I was six years old, I heard Charlie Parker. It got to me. Whatever it was, it reached my heart. I knew I wanted to do that even if I didn't know what it was."

Bartz pored over his uncle's collection, focusing on recordings by Louis Jordan as well as Bird. When he was 11, his parents relented and got him a horn and he started taking lessons from a neighborhood teacher.

But late at night, Bartz would lie awake listening to a Chicago DJ who would play Charlie Parker. It was only after the radio stations in his native Baltimore had gone off the air that he could get a strong enough radio signal, but it was enough to keep him up all night, sometimes, listening to the music.

"I didn't just listen. I studied. I didn't realize it at the time, but I was studying the music and that developed my ear."

Though his ear could discern the differences in whatever he was hearing, Bartz decided to go to college to learn the theory behind the music he had been studying. He chose Juilliard largely because it was where Miles Davis had gone. Juilliard didn't have a jazz program at the time so he spent two years studying classical music, learning theory and harmony in class, while exploring the local jazz scene outside of class.

When Max Roach invited Bartz to go on tour, it provided an opportunity to do what he loved and he left school. As his professional career flourished, he says he realized how very much he had learned during his time at Juilliard, especially the ability to analyze compositions—a skill he has continued to apply throughout his career.

Which brings him back to another concern he has about his students.

"They go to school to learn jazz which means they miss out on a whole lot of stuff. If all they are studying is jazz, they are not studying music. They need to study music and then they can play whatever they want."

Bartz's career has taken him through many musical styles. He played with jazz greats like Miles Davis and Woody Shaw. He recorded with the vocalists Phyllis Hyman and Syreeta Wright. His own bands have been known for their combination of funk, hard bop, and soul. This past summer, he has performed in New York City clubs with DJ Logic and the Greyboy Allstars.

What Bartz doesn't do is improvise.

"Listen to the dictionary definition for improvise: 'unstudied, off-hand, unprepared, unplanned,'" he reads from the dictionary app on his iPhone. "I resent all of that. I've studied too hard over all these years to have what I do described that way."

The term Bartz uses instead is "spontaneous composition." Practicing some days for 12 hours at a stretch, he says he knows what he is going to play, even if it is only the second before he plays it. He only improvises if he makes a mistake.

And he expects his students to learn to do the same. He is patient, though.

"One lifetime is not long enough to learn this. It just isn't."

University of the Arts “Z” Big Band: Jumpin’ at the...

The University of the Arts “Z” Big Band: Monterey, Here...