Garage a Trois: Garage A Trois: Always Be Happy, But Stay Evil 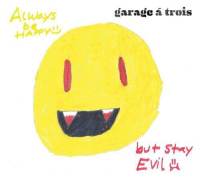 Always Be Happy, But Stay Evil

The story of jazz/rock cominglings is a not a happy one, strewn, as it is, with compromise and the middle ground. But it does include some happy chapters, several of them set in the modern jam band era. One of these concerns Garage A Trois, the group which has, since 2009's Power Patriot (Royal Potato Family), consisted of tenor saxophonist Skerik, keyboardist Marco Benevento, vibraphonist Mike Dillon and drummer Stanton Moore. The quartet retains the name of its founding, three-piece incarnation—Skerik, Moore and guitarist Charlie Hunter—who recorded the band's debut, Mystery Funk (Fog City, 1999).

Most worthwhile jazz/rock cominglings have been collisions rather than fusions, coming from the extremes of both styles, crashing them together and making sparks fly. Garage A Trois is one of these. Moore is, at his core, a rock drummer who renders the description "heavy" inadequate; not for nothing is he credited on Always Be Happy, But Stay Evil with "drum pummelling." Skerik's style straddles the not unrelated traditions of old school, bar walking, tenor honkers and squealers, and the free-roots movement which grew out of the new thing in the 1960s. He's credited here with "saxophonics and Efx."

Then there's Benevento, frequently and rightly lauded in these pages, a sound sculptor who is, if not sui generis, then sui an awful lot of generis. His work pulls together serious jazz piano improvisation, trash pop from the 1950s and 1960s, head-shaking metal and many way stations in between. Benevento's custom-made, audio-unique "circuit bent toys," his array of retro and modern keyboards, and his distinctive talent as a tunesmith, have made his own-name albums Invisible Baby (Hyena, 2008), Me Not Me (Royal Potato Family, 2009) and Between The Needles And Nightfall (Royal Potato Family, 2010) among the most compatible jazz/rock shotgun weddings of recent years. Vibraphonist and percussionist Dillon, too, is a prolific songwriter, if not as singular a one as Benevento, and he composed about half of the material here. (Benevento wrote two and Moore and Skerik one each, with a remake of John Carpenter's "Assault On Precinct 13" closing the set).

Dillon's tunes, four of which open Always Be Happy, But Stay Evil, are rifftastic confections driven by Moore and including brief solos from Skerik, Benevento and Dillon. Benevento's pair are, as we have come to expect and delight in, more nuanced and four-dimensional, showcasing the composer's quirky melodies and catchy hooks. "Swellage" has an ominous vibe, enhanced by tolling tubular bells, multi-layered keyboards and Skerik's best solo on the disc. "Thumb" is a deranged piece of mutant exotica, up there close to the masterpiece "The Real Morning Party" on Invisible Baby. Skerik shines again on his own "Baby Mama Drama," a rare outing for Moore on brushes. The tubular bells return on Dillon's by turns pretty and warped "Chimp & Flower," his most ambitious piece on the album.