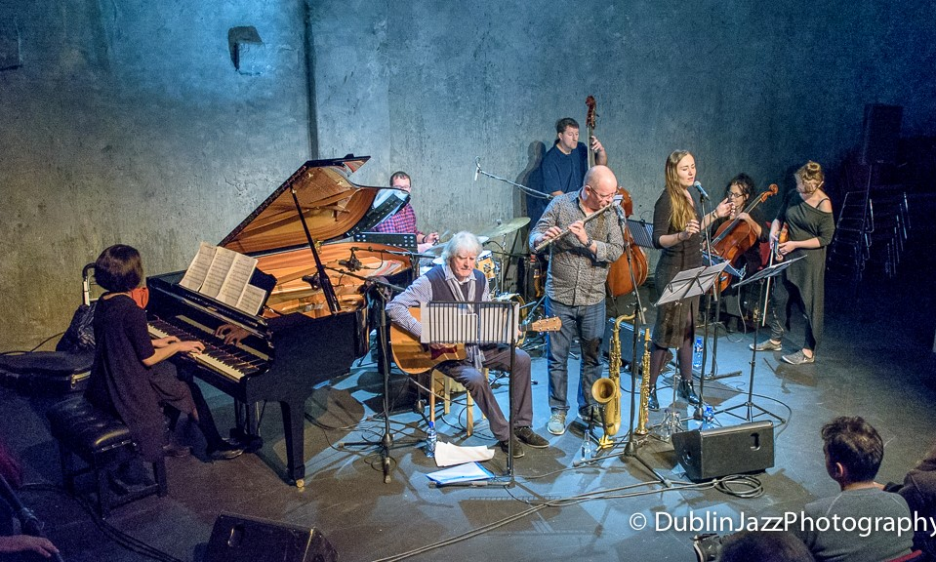 By James Fleming
December 17, 2018
Sign in to view read count

The keys of Roth's sax clacked like claws on stone beneath the mercurial, bubbling sounds of the feedback.

On Saturday morning in The Mick Lally Theatre's lobby, Galway Jazz Festival's Pop Up Record Shop sold the works and wares of the festival's many performers. Meanwhile, over the customers' heads in a loft rehearsal space, Toner Quinn from the Journal Of Music led the "Brexit Schmexit" panel. The Irish artistic community's unspoken fears of Brexit were at last said aloud, robbing those fears of some power.

At high noon in the Nuns' Island Theatre, Jasmine Flowers, "an exciting project combining Javanese Gamelan, improvisation, and electronic music," played their unique song for the crowd. At the same time in Massimo Bar, Nigel Mooney and The Johnny Taylor Trio set the air alight with their music.

Back in the Black Gate Cultural Centre's candle-lit basement beneath Eglinton Street, Nick Roth debuted his most ambitious work. Until the improvised encore, Roth alone made all the music by recording and looping it through his laptop and venue's audio. Field recordings Roth made on a trip to Java were the only pre-recorded part of the performance. Every other note of music was played as thrillingly and shockingly live as a human brain's bioelectricity.

It began just as Roth described it to the crowd: with feedback tones from his alto saxophone, as deep and open as the Mariana Trench. The keys of Roth's sax clacked like claws on stone beneath the mercurial, bubbling sounds of the feedback. Roth seemed to be sculpting the airwaves; they dripped with the wet sonic clay he molded beneath his fingers. He rocked back and forth as the tones pulsed and throbbed, sending air whooshing through his horn in great lungfuls. A scraping, abrasive sound above the quiet rhythm of the feedback was joined by the atmospheric recording of tropical rainfall on a jungle's massive leaves. Roth then put down his alto and turned to the piano. For a split second, there was only the light sound of the raindrops, until the piano's notes started to echo spectrally through the basement, chased by a low, tolling note from the left-hand side of the keyboard.

Roth let gentle jazz chords fly that offset the natural ambience of the loops and the upright piano's notes. The dissonance grew as he moved to higher cluster chords and the groove rolled in on fractured limbs. Cecil Taylor-esque chordal blasts moved through to a classical figure, which retreated back into free jazz territory. Roth then moved from the piano to the soprano sax for Pharoah Sanders-like free jazz squeals through to an almost traditional New Orleans lick. Back on piano, he sweetened the air with mellower chords before returning to the dark, menacing undercurrent that flowed through the whole 40-minute piece.

The loop of soft pattering rainfall on undergrowth played the whole time. Roth moved back to the soprano and the songs of birds of paradise offset its violent leaps and honks as well as his rocking back and forth. He paused to tap a key on the laptop, cueing a loop of his last few licks. He bounced a chord off the piano's keys as the music of the tropics dropped away. Walking a bass line across the left-hand keys, a huge big band chord ushered in a duel between both hands. Once more, a fresh loop began, this time of the piano, and Roth picked up his alto once more and reacted to the loops' movement with spontaneous energy. Finally, he picked up his soprano one last time to end the work on a long low note.

Roth congratulated the crowd on sitting through a piece that many would describe as "difficult" yet would be more aptly described as "brilliant." It is too rare nowadays for an artist to make music that is both as complex and brilliant as that of Roth at Galway. When bass clarinetist and assistant festival programmer Matthew Berrill and pianist Huw Warren joined Roth for an encore, they made brilliance on the spot, improvising a shining flash of music right then and there likely never to be repeated again.

Many of the same faces were present once again in the Mick Lally Theatre that afternoon. Tommy Halferty's nonet walked the crowd through his Seven Musical Steps To Camus, a suite detailing the life and works of philosopher/writer Albert Camus. Halferty deftly moved the audience from the suite's opening through "The Stranger" and "The Fall" as well as a gorgeous epilogue in which Michael Buckley's flute and Aleka Potinga's voice moved in unison through the stratospheric melody.

Many listeners left the auditorium only to come back very shortly for the exquisite, passionate set from German saxophonist Anna-Lena Schnabel. She began with "Dying Swan Under A Bamboo Moon," and moved immediately into "Luggage." As the piano played the soft opening chords, Schnabel played only the mouthpiece of her saxophone. She coaxed a singing, ghostly quality from its shallowness. Slurring her notes together as the volume increased, she returned the mouthpiece to its instrument while the piano kept the pulse going in the left hand as Schnabel ran bells across the exposed piano strings. The bells created a zing of sound zipping through the air.

The tension and volume crept ever higher as the piano played huge, clashing block chords and Schnabel threw percussion instruments into the piano. The pianist played like some possessed mad scientist, passionately ripping horror movie chords from the piano while the death rattles of the abandoned percussion instruments sounded from within its body. Schnabel then picked up her saxophone, and the piano suddenly quieted down, as if someone dropped a guillotine blade on the volume. An immense, lumbering groove kicked in, almost heavy metal in its weightiness, and Schnabel threw down a simple sax line in a strong, muscular tone. She played with rapturous, dark euphoria, like Pharoah Sanders descending into Hell, moving through the tempo changes and the mad pace to another sharp, sudden drop in volume. The piano played gently, softly before a final harmonic from the bass. After the applause, Schnabel's fiery passion visibly moved back into her.

She shyly introduced "Toy," a tune in 3/4 time but void of any strong backbeat. It relied more on the infamous concept of "implied time," where each member keeps time for themselves and rhythm be damned. The band soared over the song's wide sheets of sound as Schnabel threw her head back and raised her sax in a passion at marked odds with the opening, bowed bass note of the following tune, "Lost Lament." For that tune, the bass created a mournful, dark sound that almost conveyed the physical feeling of the bow's horsehair on the strings. Schnabel entered with a wide, soft tone on her sax that hardened as the tune approached its terminus. Suspenseful broken piano chords trickled out of the keys, which hung softly over the sharp smacks of the chainless snare drum opening the next tune. The pianist took up the melodica to close that tune with Ornette Coleman-like unison runs alongside Schanbel's saxophone. Schnabel darted over the mischievous bass line that underpinned the muscians' wild adventuring.

With books placed in the piano's strings, "Drunken Books" slid in on glassy, frightening prepared piano sounds that were as sharp and glittering as a broken kaleidoscope. Schnabel muted her saxophone with the side of her knee. The pianist played a Jerry Lee Lewis style trill that slowly metamorphosed into a dissonant European lick at odds with its American juke joint origins. As the title implied, the band lurched drunkenly through triple meter while the piano strings clicked against the paperbacks until stuttering saxophone finish.

"Plop," the quartet's finale, was built on a riff that contrasted with the softness of the song's title. The sax honked and spat notes that rose and fell sharply. The dissonant but disciplined riff that sprang up grew from the pure, nourishing wells of Ornette Coleman and John Coltrane. Schnabel pulled the mouthpiece from her sax once again and played it alone for a split second before she reattached it and threw herself back into the rapturous playing of her quartet. She fired off ascending triplets from her saxophone while stomping her foot and bucking back and forth. The bassist ventured way up the neck of his instrument. They returned back to the opening riff for the finish. Building upwards from its foundations, they stopped sharp, perched on a split second of silence and then let the riff rip one last time, scarring the crowd's memory with its razored edge.

For their encore, "Goodnight," Schnabel at last picked up the flute that had gone untouched beside her microphone all evening. Once again, the band led the crowd across 3/4 time but now in a gentle, pastoral rhythm. Schnabel would shoot up onto her toes' tips when she hit a high note. The pianist's hands crossed over each other, the right hand playing a complex bass line while the left played a simpler melody atop it. The emptiness and expansiveness, of the piece gave a sense of immensity and possibility, as beautiful as watching a the swirl of a nebula. Then, it was done, ending on the haunting higher keys of the piano. After the all the wildness, the show came to a peaceful rest.

A short while later, the Ashley Henry stepped under the Mick Lally Theatre's spotlights while the Koko Ensemble played at Il Vicolo with trumpeter Bill Blackmore. Henry's band, augmented on a couple of tunes by vocalist Cherise Adams-Burnett , cloaked their youth beneath their virtuosity. Their playing dazzled the crowd with its smoothness, finesse and sheer mastery. It ended with a delicate piano cadence that hung in the air as fine and silvery as freshly woven silk but as strong and sure as a spider's webs.

Once again, the festival raged on into the wee hours at Biteclub, described as resembling "Downtown Abbey run by anarchists." WorldService Project played into the night, lit by retro-futuristic lights and powered by the ceaseless enthusiasm of the crowd at the Galway Jazz Festival.