BY DAN BILAWSKY
November 8, 2015
Sign in to view read count 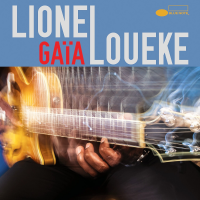 Those who figure that this reunion between guitarist Lionel Loueke and his longtime trio mates will be a simple trip down memory lane have another thing coming to them. While Loueke, drummer Ferenc Nemeth, and bassist Massimo Biolcati could've certainly delivered another globally-infused set replete with fluid gestures and finely-calibrated interplay, à la their work on earlier Loueke outings like Virgin Forest (OBJECT/ObliqSound, 2006) and the pair of albums they made as the cooperative trio known as Gilfema, they didn't. Instead, they've delivered a spirited set of raucous and gritty tunes—a musical discussion on "the nature of the Earth and man's effect on it"—recorded live in front of a small audience at New York's Sear Sound.

Loueke and company hit hard right out of the gate on the rip-roaring "Broken," an opening salvo meant, no doubt, to indicate that this trio had moved past its past. But then, sure enough, a little bit of the old sound creeps in on "Sleepless Night." The trio hasn't returned to its more manicured ways, but the global mélange with which it's associated is clearly present in the ways Loueke paints, Biolcati circles and supports him, and Nemeth creates inimitable rhythmic foundations.

As the album plays on, the listener encounters that same level of uncertainty about whether Loueke and company are headed forward, backwards, sideways, or in all three directions at once. "Sources Of Love" is pure rock speak, "Wacko Loco" is a return to the headier and heavier sounds that opened the album, "Aziza Dance" is a take-no-prisoners number that's pure magic, and "Rain Wash" is a beautiful trickle-and-flow episode in soft focus.

The second half of the album offers much the same in terms of energy and variety, as Loueke and company ride high and never commit to a single sound or direction. There's "Forgiveness," a mannered-turned-joyous number in 13/8 that's vintage Loueke; the trippy, freaky, and frenzied "Eventeens"; the deeply grooving "Gaïa," a piece that's equal parts Africa, urban funk, and fusion; and even an album-ending cover of The Bee Gees' "How Deep Is Your Love" that serves as a parting question-cum-plea surrounding Mother Earth.

While this isn't the cleanest offering from these three, and the group certainly isn't as pure-toned as it once was, that's not really an issue; it's actually a welcome change. Gaïa is this trio's baptism in fire, and it is, without a doubt, the most intense music Loueke has produced yet.