Gabrielle Stravelli at The 75 Club 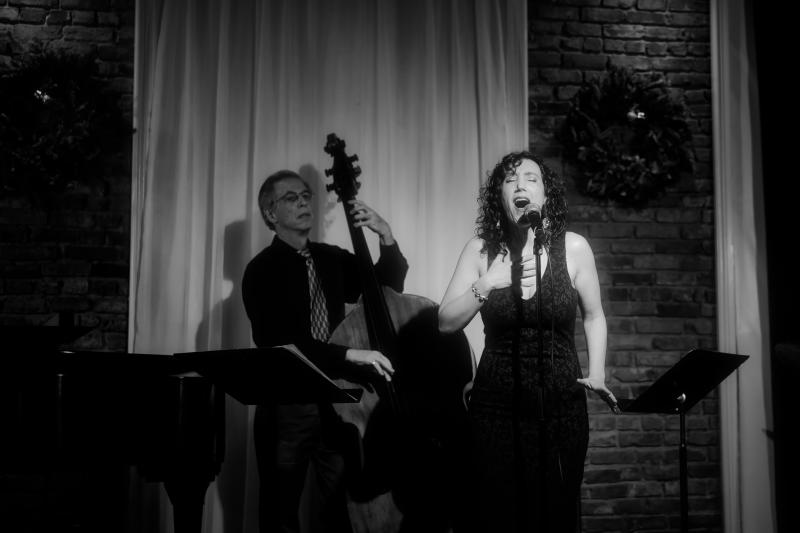 Jazz vocalist Gabrielle Stravelli's third album, Dream Ago, was the core subject of an intimate performance at The 75 Club, welcoming to her stage pianist Art Hirahara, bassist Pat O'Leary, and drummer Rob Garcia, and where she proved that having fun needn't mean skimping on rigor. From her delectable original "Cake of My Childhood" to Cole Porter's "Dream Dancing" (seamlessly arranged by O'Leary), the positive vibrations of Stravelli's musical mind activated the room with their inspiration. Not ones to ignore such a gift of opportunity, her backing musicians picked up on every cue—both spoken and unspoken—toward deepening the groove of the moment. This was especially true of Hirahara, who in his solos unpacked a vast array of colors from monochromatic themes. O'Leary, for his part, oared a distinctly melodic undercurrent, while Garcia moved through every change with shine and pizzazz. But nothing put their leader's chops on more artful display than "Little Zochee." For this reimagined O'Leary tune, originally recorded in 1985 and featuring the late Tom Chapin on flute, Stravelli composed a vocalese around Chapin's solo to scintillating effect. With flawless intonation and rhythmic boldness, she bounced through every twist and turn on the heels of a smile, as also in her own "Prism."

The hour-long set also included a song that never made it to the album: "Whistling Away the Dark." Written by Henry Mancini and Johnny Mercer for the 1970 film Darling Lili, the painterly demands of this haunting number were dutifully met, making it a highlight of the evening. Further cinematic delights awaited in Hoagy Carmichael's "Baltimore Oriole," a sultry ditty meant to be a theme of sorts for Lauren Bacall in 1944's To Have and Have Not.

But it was the set's opener, old standard from the 20s called "'Deed I Do," that readily showed Stravelli's instrument to be a winning combination of fire and water. Her rendition of "A Beautiful Friendship" (a song made famous by Ella Fitzgerald and Nat King Cole) found gorgeous life in duet with O'Leary. The biggest surprises, however, were two Willie Nelson songs that are a prelude to Stravelli's forthcoming project. First was the almost-bluesy "Three Days," from Nelson's 1962 ...And Then I Wrote, followed by "Butterfly," a dreamlike country ballad written on the wind of his 2017 album, God's Problem Child. For icing, Stravelli encored with "Sleigh Ride," jingle bells and all.

Just as entertaining as Stravelli's delivery were her tales of traveling the world as a US State Department Jazz Ambassador, influences of which have funneled into her songwriting, and by extension confirmed her abilities as a listener. It's no small feat to stand tall when everything feels like its crumbling around us, but she does so with openness of heart, welcoming you home, as if since many dreams ago.