Gabriel Espinosa: From Yucatan to Rio 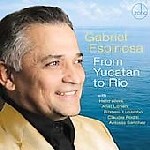 A native of Merida, the capital of the Mexican state of Yucatan, bassist/composer/arranger Gabriel Espinosa delivers his fourth album and ZOHO debut with a stunning recording, delving into a palette of Brazilian-colored music with the help of an international cast of world-class musicians. Living in Merida since the age of fourteen, Espinosa spent years listening to and absorbing the bossa nova sounds brought by touring groups headed for the United States as part of the new wave that swept the U.S. in the early '60s.

For Espinosa, From Yucatan to Rio is the natural culmination of that experience which so heavily influenced him that he adopted the bossa and samba sound as his own, composing the majority of the album's Brazilian style repertoire. As an arranger, Espinosa adds his own twist to Antonio Carlos Jobim's "Agua de Beber," featuring vocalists Darmon Meader and Kim Nazarian from the renowned New York Voices, as well as Alison Wedding providing background alto vocals. Wedding also contributes two original scores, contributing lead vocals on "We've Come Undone" and "Remain."

For this enchanting session, the bassist assembles an extraordinary cast of musicians, among them master trumpeter Claudio Roditi, pianist Helio Alves, guitarist Romero Lubambo and drummer Adriano Santos. He rounds out the personnel with fellow countryman Antonio Sanchez sharing drum duties, while Israeli clarinetist Anat Cohen makes an appearance on the buoyant "Nuevos Horizontes." Last but certainly not least by any measure, Espinosa has the good fortune of drawing upon the magnificent alto saxophone voice of Switzerland's George Robert, who plays a major role throughout the recording but is especially pronounced on the semi-classical "Klavier Latino" and two standout tunes, "LP 07" and "Azul Y Negro." Roditi and Robert deliver expressive lines on Espinosa's light and spacious ballad "Maria," with guitarist Lubambo providing very nice warm chords leading to the end of the piece. Pianist Alves introduces the samba-fueled finale "Huracan," taking over with a furious performance on an up-tempo tune that, indeed, moves with the force of a hurricane.

Espinosa is an unselfish leader who prefers to remain in the background while his band mates bask in the limelight, with superb solos from all. Accordingly, there are few bass solos on this disc but this album is not so much about the featured soloist as it is about the music, and on this point Espinosa takes all the credit, since his compositions are what makes From Yucatan To Rio such an enjoyable album to hear and revisit often.