Home » Jazz Articles » Rolling Stones: From the Vault: The Marquee Club Live in 1971

Rolling Stones: From the Vault: The Marquee Club Live in 1971 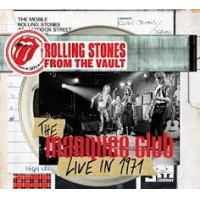 From The Vault: The Marquee Club Live In 1971 documents the end of the Rolling Stones' tour of the United Kingdom that year. The band had not toured at home since 1966 and touted this tour as the concert-equivalent of good bye to Great Britain before becoming tax exiles and absconding to the South of France and the historic recording of Exile on Main Street (Rolling Stones, 1972) at the Villa Nellcôte. Both events were recently the subjects of author Robert Greenfield's Ain't It Time We Said Goodbye: The Rolling Stones on the Road to Exile (Da Capo Press, 2014) and Exile on Main St.: A Season in Hell with the Rolling Stones (Da Capo Press, 2006), respectively, and provide a vivid background to the music made, then and now.

The present recording took place March 26 at London's Marquee Club and was captured roughly a month prior to the release of Sticky Fingers (Rolling Stones, 1971). This same tour afforded the often bootlegged and now legitimate Get Your Leeds Lungs Out recorded March 13 and finally remastered and released as part of the Sticky Fingers Super Deluxe Box Set (Universal, 2015). This recording and DVD afford a snapshot of the band just as it was peaking in live performance. Coupled with the band's 1972 American tour, after the release of Exile, this was the era of the Rolling Stones' performance zenith. They would never sound this hungry or vital again.

The set list sees the band transitioning from their 1969 and '70s tour performances promoting Let It Bleed (London, 1969) to the gradual incorporation and domination of Sticky Fingers and Exile material for the 1972 American tour. The band retained sonic remnants of their early recordings while quickening their lo-fi, garage rock sound. This facet is immediately heard on "Live with Me" and "Dead Flowers." The performance is wonderfully reckless and dirty. And rising out of the Jagger-Richards miasma of swagger comes the superb excellence of Mick Taylor's lead guitar. Whether the blues, country, or rock, Taylor as well-studied and fresh. "I Got the Blues" and "Bitch," from Sticky Fingers, get a workout with two alternate takes of each provided. A subdued "Midnight Rambler" here offers interesting juxtaposition with incendiary performance found on Get Your Leed Lungs Out. "Brown Sugar" caps this brief concert, offering a brilliant view of the Rolling Stones' coming events.

There is nothing new about these performances. They have been available for years as bootlegs. New or not, this was the most fertile period for the band on their mission to reintroduce America to her music.