Sheila Jordan: From the Heart

BY MATHEW BAHL
October 1, 2000
Sign in to view read count 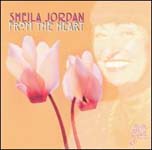 From the Heart is a compilation CD that draws from three out-of-print albums Sheila Jordan recorded for the now defunct Muse label: Old Time Feeling (1982), Lost and Found (1989), and Heart Strings (1993). While these records deserve to reissued in their entirety, by culling tracks from each album, 32 Jazz has created a perfect single disc showcase for Jordan's considerable talents.

Sheila Jordan is a supremely musical singer with a light, ageless, flexible voice. A true jazz musician, her performances are constant improvisations that move in unexpected and oftentimes daring directions. Yet, no matter how far out on a wire she goes musically, Jordans commitment to the lyric remains absolute. When everything comes together, as it does throughout this CD, the results are as good as jazz gets.

Listen to the small miracles Jordan works on the opening song, "The Very Thought of You." Swinging, exuberant and infectiously playful, she so perfectly captures the mood of the lyrics ("I'm living in a kind of daydream/I'm happy as a king") that it would be easy to overlook the sheer creativity of her phrasing. The performance also demonstrates Jordan's ability to interact as an equal with the other musicians in the group.

From the Heart covers a wide variety of musical and emotional terrain. There are three voice/bass duets with Harvie Swartz including a remarkable medium tempo deconstruction of "How Deep is the Ocean?" Jordan delivers an irresistibly sexy "Comes Love" backed only by bass and drums. She sings "Japanese Dream/What'll I Do?" and "Haunted Heart" with a trio augmented by a string quartet beautifully arranged by Alan Broadbent. The tracks that find Jordan accompanied by just a traditional trio benefit greatly from the deft rhythmic attack and sheer beauty of pianist Kenny Barron's playing.

The high points of From the Heart are two exquisite ballads. Jordan sings Jerome Kern and Buddy DeSylva's "Look for the Silver Lining" accompanied only by Alan Broadbent on piano. Jordan drains the lyric of its greeting card sentimentality and transforms it into a statement of hope and reassurance from a woman who knows full well how difficult and unfair the world can be. Mr. Broadbent's duets with the late singer Irene Kral are legendary and his playing here amounts to a Master Class in accompaniment.

Even more extraordinary is the 18th Century Scots ballad, "The Water is Wide," on which Jordan, Barron, Swartz and drummer Ben Riley achieve an almost telepathic communion. Jordan transforms the song into a journey of deep longing and profound loss and her performance is simply staggering in the immediacy and depth of her emotions.

The Very Thought of You, The Thrill is Gone, I Concentrate on You, Lost in the Stars, It Don't Mean a Thing, Haunted Heart, Comes Love, The Water is Wide, How Deep is the Ocean?, Japanese Dream/What'll I Do?, My Shining Hour/We'll Be Together Again, Look for the Silver Lining