Alex Sipiagin: From Reality And Back 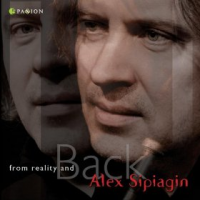 From Reality And Back comes off as notable before a note of music ever reaches the ears. In fact, this album presents itself as a bit of a jazz PR dream: bassist Dave Holland makes a rare sideman appearance here, guitarist Pat Metheny contributed an original written strictly for this project ("Son, Uvedeny Posle"), and the rest of the band is rounded out by A-listers like pianist Gonzalo Rubalcaba, whose label—5passion—serves as the record's home. After hearing all of that, it's tempting to say that trumpeter Alex Sipiagin is supremely lucky, but luck has little to do with this album's merits; better—or more accurate—to say that Sipiagin is skilled, motivated, talented and determined.

The Russian-born, Long Island-based Sipiagin is one of the most consistently creative trumpet forces on the scene today, but that's not news to most people who closely follow this art form. He's cemented his reputation as one of the best with a string of probing leader dates on the Criss Cross label, a stint with the late, great Michael Brecker, a thirteen-years-and-counting association with Holland and his band(s), and work with the Mingus Big Band. From Reality And Back is merely his latest foray into the great wide open, but words like "merely" downplay the significance of this outing; and make no mistake about it...this one is significant.

Sipiagin spreads a wealth of musical ideas across eight tracks, creating music that's alternately edgy and clean cut, focused and far-reaching, and flexible and tight; the rhythm tandem of Holland and the indefatigable Antonio Sanchez on drums helps to rectify that last pair of opposing ideals, but everybody truly contributes to the broad scope of this record from the outset: Rubalcaba's electric piano creates the mood on the album-opening "Around The Bend," which balances its askance structure atop Holland's bass lines. Sanchez constantly twists and tweaks the rhythmic tides that he creates, and saxophonist Seamus Blake matches Sipiagin in the creativity department. Together, the two horn men run in stride, dovetail their lines, and take inspirational cues from all parties at play; they make for a formidable front line here and everywhere else.

A list of highlights would have to include the brilliantly driven "End Of..." and Sipiagin's head-turner-of-a-solo on "With The Tide," but such lists are pointless when everything on a record could make the cut; not a weak spot can be found on From Reality And Back.

Around The Bend; With The Tide; From Reality And Back; End Of...; Here And Now; Chain Reaction; Son, Uvedny Posle; The Maze.

Title: From Reality And Back | Year Released: 2013 | Record Label: 5Passion