Jeff Rupert: From Memphis to Mobile 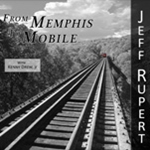 Sound and swing. It seems that these two elements of the very DNA of jazz are sadly absent from much of what is offered up in some of today's recorded music. It might be smooth or contrived, but much that's heard doesn't seem in synch with the very essence of the art form. Happily, with From Memphis to Mobile, saxophonist Jeff Rupert and cohorts excel supremely at both sounding and swinging.

The CD offers up eleven selections that provide a terrific sonic showcase for Rupert and his band mates. Accompanied by a fine rhythm section consisting of the marvelously swinging Kenny Drew, Jr., bassist Richard Drexler and drummer John Jenkins, the group provides a wonderfully tasteful and swinging effort. Lyman Brodie's flugelhorn adds a nice dimension, too, on "Walkin' Home. More of him, please.

Rupert, an ex-Maynard Ferguson "Big Bop Noveau" tenor, has an inviting silk-sound that is never harsh, yet speaks so lyrically it's almost vocal. Rupert sounds like Stan Getz on the tenor, cascading over changes fluidly with restraint and taste on "Bad Moon" and "Beatrice.." He also shows fine compositional chops with seven unique originals. "Basin Street Blues," complete with a classic quote from Louis Armstrong) and other elements displayed across the disc, indicates that Rupert knows where his roots are. He salutes and serves them with swinging, Southern spice.

As expected with a title drawn from an American classic—"Blues in the Night"—the CD is painted blue throughout, but notably on "Rock Skippin'" and "Thunderbird. Rupert soulfully shades blue all across the effort, including "If I Had Only Known" and "I Loves You Porgy." Drew's keyboard does the same with flame on Rupert's express-ive blue train of "The Norfolk Southern RR." "Chasin' Tail" is a high-speed runaway for the group to push the pace furiously and close to the edge. Duke Ellington's "A Single Petal of a Rose," here delivered magnificently, secures Rupert's and Drew's places as deserving acolytes and soon-to-be masters.

The production, recording and engineering values are excellent. Kudos to co-producers Scott Elias and Rupert. From Memphis to Mobile is an elegantly swinging, enjoyable recording. Hop aboard this train.

Rock Skippin'; Bad Moon; If I Had Only Known; Beatrice; The Norfolk Southern RR; I Loves You, Porgy; Chasin' Tail; Walking Home; Basin Street Blues; Thunderbird; A Single Petal of a Rose.