By John Kelman
October 19, 2008
Sign in to view read count
Few artists think they're doing something momentous, something that can change the landscape of music.  Most just follow their instincts, follow their ears, do what they do, and sometimes the result goes far beyond any expectations, personal or otherwise.

When King Crimson co-founder/guitarist Robert Fripp brought his pedal board to Roxy Music keyboardist Brian Eno's home studio on September 8, 1972, hooked himself up to two Revox reel-to-reel tape recorders and, utilizing this primitive, pre-digital approach to looping, recorded two improvised tracks, who was to know how significant they would become? Of course, were it not for Eno's real-time sonic manipulations of what went to tape, there'd never have been a 21-minute "The Heavenly Music Corporation," and the shape of electronic music would, no doubt, be fundamentally altered.

Fortunately, "The Heavenly Music Corporation" did get released, along with a second experiment called "Swastika Girls," as No Pussyfooting (1973), on Island Records' budget-priced Antilles label. Island didn't know what to do with this strange music that ranged from ethereal and, well, heavenly, to more angular and menacing; but No Pussyfooting—a Fripp reference to not compromising what he and Eno felt was right—still went on to sell over 100,000 copies in the UK and Europe.

While it finally reached North American shores (beyond being an expensive British import in the 1970s) in CD form in the 1980s, No Pussyfooting and its follow-up, Evening Star (Antilles, 1975), never sounded the way they deserved. With Fripp & Eno an ongoing collaboration that has become increasingly active again since the release of The Equatorial Stars (DGM Live, 2004) and Beyond Even (DGM Live, 2007), it makes perfect sense that the two albums that not only started it all for Fripp & Eno, but were vastly influential in the realms of electronic and ambient music, finally receive the sonic updating they deserve. Additionally, No Pussyfooting is expanded to a double-disc, with some interesting alternate views of the music that are the result of both happenstance and intention. 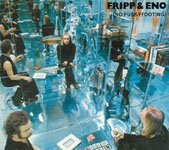 Fripp's experimentation with primitive looping came to be called Frippertronics—a predecessor to the more broad-palette of his Soundscapes recordings including Love Cannot Bear (DGM Live, 2005) and At the End of Time (DGM Live, 2007), and a unique guitar-as-orchestra texture that would be used with future incarnations of King Crimson, as well as sessions with artists including Peter Gabriel and David Bowie. But it all started here, with an apparently simple process that allowed him to layer multiple phrases on top of each other to create a rich, lush and orchestral sound.

The two side-long tracks (at least, in the days of vinyl) are not, however, merely experiments in improvisation and primitive looping— although that would have been enough. As different as each track is, together they opened a window into an area of possibility that previously did not exist. "The Heavenly Music Corporation" begins with a single, sustaining note, a fifth added a minute in and a gentle pulse created as the loops softly ebb and flow. Despite its harmonic stasis, it's to Fripp & Eno's credit that it not only captivates throughout its 21 minutes, but actually takes on a shape that treads a fine line between the hypnotic and more actively engaging. Even at this early stage, Fripp understood how to layer brief melodic fragments to great effect, while Eno—whose sonic manipulations put him at odds with Roxy Music front man Brian Ferry, ultimately leading to his departure following the release of For Your Pleasure (Warner Bros., 1973)—manipulated Fripp's playing to create big washes of sound, building great, dynamic peaks and valleys.

"Swastika Girls" is more inherently jarring, if only for Eno's oscillating synth, a primitive sequence that underscores its entire 19 minutes. Fripp creates loops of djangling guitar arpeggios over the course of the track's first seven minutes, an inevitable build leading to the reintroduction of the same kind of sustaining legato lines heard on "The Heavenly Music Corporation." This time, however, the overall ambience is more invasive, more dangerous. Despite having a repetitive, two-chord pattern that takes it away from the harmonically static "The Heavenly Music Corporation," it creates a greater sense of unease that the duo would explore to even greater effect two years later on the 29-minute "An Index of Metals," on Evening Star.

This remaster of No Pussyfooting also includes a number of curiosities to flesh it out to two hours across two discs. Not exactly radio-friendly in length, expectations that either track on No Pussyfooting would get much airtime were on the money. But "The Heavenly Music Corporation" did get one official play on UK radio, courtesy of legendary radio personality John Peel. What transpired, however, was a complete broadcast of the piece—but in reverse, the result of a misunderstanding as to how the reel of tape (the BBC's source, rather than the vinyl album) was stored. While the idea of being unable to determine whether or not a piece is being played in the right direction might suggest a problem with the music, it's in fact this kind of happenstance and appreciation of the concept of randomness in music that would begin driving Eno even further, as he began formulating the idea of Ambient Music in 1975. "The Heavenly Music Corporation" not only works in reverse, but makes perfect sense.

A similar experiment with "Swastika Girls" and a version of "The Heavenly Music Corporation" played at half-speed are more considered—the latter the result of long-time King Crimson documenter and DGM Live webmaster/moderator Sid Smith experimenting back in the days of vinyl by playing No Pussyfooting at half speed on his turntable. But what both tracks prove is that music is a living, breathing thing that, despite the apparent permanence of committing it to tape/disc, can still be grist for experimentation. The half-speed, double-length "The Heavenly Music Corporation," in particular, is perhaps even more trance-inducing and sonically dense. 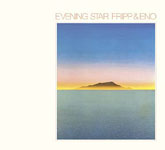 By the time Fripp and Eno reconvened again in 1975, much had happened. Fripp had folded King Crimson and was actively speaking in interviews about the trials and tribulations of the road, and a new aspiration towards "small, intelligent, mobile working units." Concurrent with a new Fripp & Eno project, Eno had begun experimenting with what would become known as ambient music, creating a piece called "Discreet Music" that was intended as a backing track over which Fripp could improvise in a live setting. A thirty-minute version would occupy the majority of Discreet Music (1975, reissued by Astralwerks, 2004), and a three-minute segment was excerpted to close side one of Evening Star.

The first side of Evening Star is even more calming than "The Heavenly Music Corporation"—pastoral, even. The duo had taken to performing live on occasion and a portion of a show from a May, 1975 tour became the basis for the album's tranquil opener, "Wind on Water." Unlike Eno's ambient work, however, this music still managed to engage on a more direct level, with Fripp's phrases and Eno's evocative treatments creating a piece that works on a multitude of levels.

The four tracks making up the original side one of Evening Star—"Wind on Water," "Evening Star," "Evensong" and "Wind on Wind"—segue seamlessly from one to the next, creating a 19-minute suite that expands upon the innovations of No Pussyfooting while, with greater attention to harmony and motion, moving the Fripp & Eno concept forward.

But as peaceful as the first side of Evening Song is, it's the 29-minute "An Index of Metals" that, like "The Heavenly Music Corporation," would become a model for future sonic experimentation by countless artists. With greater weight, more angular harmonies, jagged loops and abstruse melodic lines, "An Index of Metals" proves the viability of the Fripp & Eno concept in a multitude of contexts—beauty not always having to be one of them. There's a more industrial edge—like No Pussyfooting's two side-long pieces, indexed on the CD to make it effectively a multi-part suite—with an overall ambience that's more disturbing than lulling. Still, while it's the antithesis of ambient music, the greater gravitas of "An Index of Metals" makes for an engrossing listen, all the more so as the result of its flawless remastering.

As is also true with No Pussyfooting. Fripp and Eno have both gone on to more diverse and successful careers, but No Pussyfooting and Evening Star remain early pinnacles, representing experimentation that continues to inform their work, individually and collectively, to this day. It's safe to say that experimental electronic music would still exist without Fripp & Eno, but it's an undeniable fact that, without them and these two highly regarded and influential albums, it would be a different beast altogether.