Freddy Cole: The Cole Nobody Knows

By JIM SANTELLA
December 4, 2005
Sign in to view read count 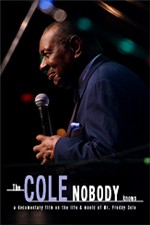 Freddy Cole
The Cole Nobody Knows
Plan B Productions
2005

Nat King Cole was unforgettable. His shadow extended far and wide. But, no one ever intended for that shadow to obscure the careers of Natalie, Ike, Eddie or Freddy Cole. Their talents overlap somewhat, but there's never been reason to consider the relationship anything more than what it is. There are other family members, too, and each has shown that heredity counts for quite a lot. After all, we do get much of our innate ambition from family ties.

This brief documentary repeats the message that Freddy Cole issued on I'm Not My Brother, I'm Me (Sunnyside, 1990), which was reissued last year. The title song, in fact, gets more air time in this film than any of the other selections.

At 74, Cole continues to perform all over the world. He is shown with his quartet, singing and playing piano with a refreshing ambience. Each song is clipped, however, so that we can absorb the comments of Cole and his guests. Nevertheless, the film contains plenty of music, and that focus is spread evenly throughout. Cole, the entertainer, gives his audience a delightful performance. As his guests point out repeatedly, he's a fine pianist who may be underappreciated. The film concentrates on his vocal performance, which is always pleasurable.

Freddy Cole's discography lists 17 albums that have been released between 1978 and 2005. The Cole Nobody Knows includes brief commentary from radio hosts H Johnson and Carl Anthony, trumpeter Clark Terry, saxophonist David "Fathead" Newman, pianists John Di Martino and Monty Alexander, guitarist Richard Barone and drummer Nicolas Gilliet, who all remark on the unique sound that Freddy Cole attains, and how different his performance is from that of Nat King Cole. All arguments aside, the music alone is sufficient to give this film a pleasant aftertaste.

Tracks: Take A Little Time to Smile; L-O-V-E; You're Sensational; Clown Town; It's Only a Paper Moon; It's Crazy, But I'm In Love; I See Your Face Before Me; Walking My Baby Back Home; Best Man; I Will Wait For You; Unforgettable; I'm Not My Brother, I'm Me; On the South Side of Chicago; That's All; As Long As I'm Singing.