By Steve Bryant
September 16, 2012
Sign in to view read count 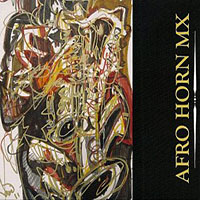 When Afro-Mexican Drummer Francisco Mora Catlett first came to this country in the1970s, he dreamed of playing drums for the Sun Ra Arkestra. Not only did Mora achieve his dream, he also forged a lifelong relationship with drum legend Max Roach, which resulted in his performing in Roach's seminal drum ensemble, M'Boom. As a composer and bandleader in Detroit, Mora focused on creating Music of "The Afro-Americas," a vision which encompassed fusing the music of Cuba, Brazil with American modern jazz.

For the highly-anticipated double-disc Afro Horn MX, Mora draws inspiration from the legend of the Afro Horns, with Henry Dumas (1934-1968) writing, in his short story "Will The Circle Be Unbroken?," that there are only known to be three actual "Afro Horns" on the planet. The horns are forged in a rare metal only found in Africa and South America. No one knows who forged the horns, but some think that it was the Egyptians. There is one in a heavily-guarded European museum and another on the west coast of Mexico, amongst a tribe of Indians. MX also stands for Malcolm X and Mexico.

To advance his vision, Mora put together a crack team of players which includes three of the baddest reedmen to come out of Detroit—JD Allen and Vincent Bowens on tenors, and Alex Harding on baritone. The rhythm section is superb, too, including master Afro-Cuban drummer Roman Diaz, who performed with the legendary group Yoruba and Puntilla Rios, and here handles congas and bata.

The music seems to revolve around a central theme: the journey of the Africans to what is now the Americas and the diverse musics they created. The set begins with an invocation to the Yoruba orishas with Mora and Diaz playing bata drums. "Saints at Congo Square" follows, commemorating the first City of Afro-American culture, New Orleans, and is also an homage to Mora's mother, renowned sculptor Elizabeth Catlett, who created the statue of Louis Armstrong in Congo Square. The music uses "When The Saints Go Marching In" as a recurring theme while the horns create a swirling ethereal mist of sound.

"Barasuayo" features all three horns playing a mournful melody over a base of ritual bata drums, segueing into "Quinto Regimiento," which starts off with Mora evoking Roach, as Allen and Bowens engage in some sax talk that brings to mind John Coltrane, Pharoah Sanders, and Archie Shepp. Bowens, who possesses that rougher Detroit edge, comes out with guns blazing. Pianist Aruán Ortiz (someone to watch for) has a thundering attack, whose use of arpeggios brings to mind Don Pullen in his younger days.

The highlight of the set is "Los Consejos Del Olumo," a mashup of Yoruba ritual and coffeehouse slam, with Roman Diaz reading the poem on which the song is based, and a turn by Allen. The date ends with "Cultural Warrior," a dedication to the late Detroit pianist Kenny Cox (of Contemporary Jazz Quintet fame), and immediately brings to mind 'Trane and his 1960s quartet.

Even though this is an extended outing, there isn't a boring moment on Afro Horn MX. Mora is one of the most versatile percussionists in jazz and Afro-Latin music, as well as an original composer. Allen and Bowens stack up against any tenor man in jazz (including the 2012 Downbeat Rising Tenor Star, Anat Cohen), while Harding is a blaster who displays complete mastery of his instrument. Here's hoping that word of this dynamic ensemble gets out beyond the island (Mahattan) and reaches the hinterlands.