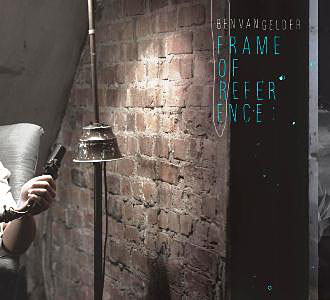 It's hard to believe that Frame of Reference is a debut. The compositions are beguiling, spirited yet poised, and doused with the arid phrasing of a seasoned master. But there's also a youthful exuberance that accompanies 22 year-old saxophonist Ben Van Gelder, who studied music at the Conservatory of Amsterdam and travels between New York and his homeland in TRhe Netherlands in pursuit of his passion for jazz.

Van Gelder's energy is echoed by an adept quintet of peers who are all in their twenties: a cerebral tone in "Wise Old Man" is enhanced by pianist Aaron Parks's compelling keys; the blistering percussive momentum in the whimsical "Peter and the Wolf" is provided by vibraphonist Peter Schlamb and drummer Craig Weinrib; and bassist Rick Rosato's resilient playing drives the free-styling "Musings."

The music also honors the past without mimicking it. John Coltrane's "Countdown" is a meticulous workout, with a pyrotechnic shower from Weinrib's traps, while Thelonious Monk's "Round Midnight" showcases Van Gelder's empathy and prowess. "Blues 2011" simmers, a swinging blues that sounds like it was recorded at the Blue Note circa 1950s. It's a convincing Van Gelder original that's surprises with its soul, attitude, and authenticity.

Van Gelder's own compositions are the most telling, however, where the simpatico flow of the band in "Guiding Principle" is reminiscent of Logan Richardson, another young saxophonist who refuses to follow convention. A fine example comes at the end with the title track, which is well worth the wait. It features the quintet augmented with additional horns, including trumpeter Ambrose Akinmusire; the harmonies are blissful and the solos pour out like melted butter.

If there's a criticism to be found in Frame of Reference, it would be that the set is at times too contemplative in comparison to the many debuts that espouse the mantra of "I can play as hard and fast as the next musician." That's not a bad thing. Van Gelder can also burn off notes with ease but, based on this auspicious debut, there's much more in his repertoire.