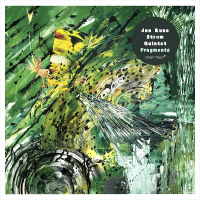 Norwegian bassist Jon Rune Strøm, subscribes to none of the self-effacement which sometimes manifests itself on dates led by rhythm section mainstays. That is signaled straight away on the first cut of Fragments, where no other instrument is heard for the first six minutes. With bow in hand, he initially duets with fellow bassist Christian Meaas Svendsen, first mining the upper registers but then pursuing diverging seams. Then Strøm alone carves out a robust pizzicato solo which culminates in a loping vamp. At that point he is joined by drummer Andreas Wildhagen and tenor saxophonist Andre Roligheten in relaxed mood, followed by trumpeter Thomas Johansson, leading to a mournful theme before the piece ends as it began, with the twin basses in tandem.

Already a fixture on the Scandinavian scene, Strøm plays a prominent role in outfits such as the Frode Gjerstad Trio, Universal Indians and Friends & Neighbors, the last of which also includes Roligheten and Johansson. Further connections abound in that the trumpeter also features alongside Wildhagen and both bassists in Paal Nilssen-Love's Large Unit. So, it would be fair to say that Strøm has chosen his colleagues for his leadership debut based on full understanding of their capabilities. Like many of those bands, his Quintet updates 1960s free jazz practices and still finds mileage there to explore.

With such an assemblage of exciting talent, it is perhaps not surprising that the group works best when broken down into subsets, a strategy that Strøm uses to good effect on the title track. A passage for Roligheten's overblown shrieks intermingling with Strøm's own growling fender bass and Wildhagen's provocative rumbling tattoo is contrasted with a much quieter interlude comprising murmurings between trumpet and Svendsen, also on fender. In turn, that is obliterated by an eruption of tenor, fuzzed-bass and drums, before they all come together in a full-on aural assault. Such eventful pieces, chock-full of such unexpected gear shifts, bear testament to the thought with which Strøm organizes his resources.

A similar breakdown occurs on the first part of "Main Source/365-B," which almost functions as a concerto for Roligheten's expressive tenor distortions, pitched against alternating choppy and smoother settings. Johansson again teams with Svendsen, but this time to subvert the rippling cadences of the other three. "Blood" provides more conventional fare, with Johansson's melodic trumpet fluttering somewhat uneasily above a slinking riff from the twin fender basses. The boppish "Wallack" acts as a vehicle for Svendsen, first in free counterpoint to Roligheten's tenor bounce, and then sawing determinedly across repeated rhythmic figures, until he disappears in a near inaudible whistle.

The final word though goes to Strøm as his unaccompanied strums, thwacks, slurs and twangs form the centerpiece of the dirge-like "Stillhetens Hav," completing a powerful bass-heavy outing.