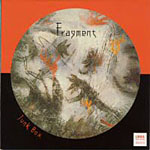 Satoko Fujii is an adventurer. Her music has spoken volumes for her daring as she's gone about her quest for the unusual in settings from solo piano to big band. Here she comes up with the concept of "Com-Impro, which stands for a kind of composed improvisation in which she uses words and graphic notation. She shares this new avenue with her husband, Natsuki Tamura (trumpet), and John Hollenbeck (percussion).

The music on Fragment. springs several surprises, but it also has a state of grace in its calmer moments. The members of the trio share ideas, interpolating them and then taking them out into articulately giddy terrain. In short, the music is not only well crafted, it is crafty.

Fujii likes to rove over the piano, manipulating the strings and picking quirky motifs on the keys. She sets up a dialogue with Tamura on "A Dream in the Dawn, where the trumpeter smears lines and squiggles against the piano's melodic passages. Free-form and composed music weave and parry as they raise the tempo to a resounding climax.

The atmosphere turns into a churning one on "Ants are Crossing the Highway. Hollenbeck's drums skitter and zigzag. Tamura flitters across with his trumpet, interjecting statements and then darting out. Fujii is intense, opening a cauldron of pulsating notes. However, the most passionate moments come when all three loop into the atmosphere and open a panoramic vista of improvisation.

The musicians' ideas are constantly fertile. Surprise is another driving force, as they keep changing pace and direction. They add to the impact with a sense of humour as well. This trait is manifested on "Your Neighbour, which opens on the structured movements of the piano, Tamura once again blowing open-ended notes. In comes Beethoven's "Für Elise, set to a marching beat from Hollenbeck which Tamura joins. Fujii takes off on a short tangent of freedom.

There's a lot going on in the heady whirlpool of this recording, and it is all delightful.

A Dream In The Dawn; Ants Are Crossing The Highway; Getting Lost On A Snowy Day; At Intersection, On A Rainy Day; Looking Out Of The Window; Your Neighbors; Wok Cooking; Tin Can Godzilla; Cat's Nap; Lullaby.