By Mark Corroto
January 3, 2021
Sign in to view read count 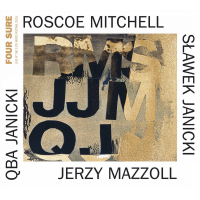 This quartet of legendary master musician Roscoe Mitchell and three polish players was recorded in Bydgoszcz, a city in northern Poland at the Mózg Festival in 2015. The genesis though can be found back in 1994, when a quintet led by clarinetist Jerzy Mazzoll released Out Out To Lunch (Muzyka Z Mózgu, 1994), their homage to the late Eric Dolphy. The band, which included bassist Sławek Janicki, was exploring the freedom of jazz as their country was completing a transition to democracy. The band, known as Mazzoll & Arhythmic Perfrection, sent the recording to the members of the Art Ensemble of Chicago. In the twenty years between these two events, the Polish jazz scene (especially free jazz) has flourished, elevating players and festivals. The collaborations between Chicago musicians has been especially strong, with saxophonist/composer Ken Vandermark leading the charge.

While Vandermark might be considered the second generation of Chicago creative improvising artists, Roscoe Mitchell is indeed the first. His star continues to rise, and his sound (at age 75 in 2015) is as mighty, maybe more powerful than heard in the revolutionary recording Sound (Delmark Records, 1966).

This live date finds each of the nine tracks flowing one into the other. Opening with Mazzoll's bass clarinet, Janicki's double bass, and the drums of Mazzoll's son, Qba Janicki, the trio pours forth with a circular breath clarinet landscape before Mitchell joins on the second section with his own circular breathing marathon of sound. Their two-reed marathon of continuous sound is accented by pizzicato bass and the busied clattering of percussion. Needless to say, no musician can outlast a circular breathing barrage from Mitchell. By the fourth track, "Second Sound (Double Dialogues)" Mitchell is cut free to investigate another scintillating, snaking soprano saxophone solo. The music intensifies with "Third Sound (Two Trios)" and "For Love (Transport)" with the quartet in full flight. This is energized free jazz at its finest. Note, this is not just a blowing session. Passages like "Trans (Love Terrain)" and "Syberian (Love Train)" with is electronic components complement Mitchell's explorations. The Polish trio is back with "Kochas Was (I Love You)," heard as a post-meditation denouement to cap off a very special evening, and maybe introduce a new working unit.