Misha Mengelberg Quartet: Four In One 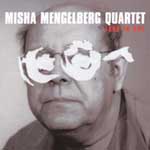 Most outings between drummer Han Bennink and pianist Misha Mengelberg leave listeners wondering just when the proverbial 'kitchen sink' will be tossed-in. Together, the pair are anything but conservative in their approach to music. Beginning with Eric Dolphy's Last Date in 1964 and continuing for the next four decades, they have carried the Dutch jazz scene with their work in the ICP Orchestra and various collaborations. Mengelberg is a true champion of the music of both Thelonious Monk and Herbie Nichols. Bennink is equally comfortable in free jazz as he is in straighter settings. Try and name another drummer that can move between the two worlds with a similar ease.

Mengelberg's newest quartet is half-American, with the inclusion of New York bassist Brad Jones and trumpeter Dave Douglas. The Downtown musicians and the Dutch find common ground in a mostly post-boppish-modern sound. Douglas' trumpet work shines as Mengelberg puts him through his paces. This record is built around a core of three Thelonious Monk tunes, "Four In One," Monk's Mood," and Criss Cross" as if to demonstrate the logic of Mengelberg's compositions. The disc opens with the up-tempo "Hypochristmutreefuzz" (from Dolphy's Last Date ), and bookends the Monk music with a march "Die Berge Schuetzen Die Heimat " and some island music, "Kwela P'Kwana." Bennink's tendency towards deconstruction is held in check by Douglas' orderly sound. The two have met before, on the duet record Serpentine (Songlines 1996). Where that outing entertained, it contained blanks that are nicely filled by the bass of Brad Jones and the compositions and piano of Mengelberg.

This session is a joyful combination of skillful musicianship and pixilated compositions. Mengelberg is heir to the Monk charm and perhaps Charles Mingus' wit. His playing straddles Monk with his eclectic-European timing. Fans of both the ICP Orchestra and Douglas's work will not be disappointed. Highly recommended.