Forward Into The Past

By JEROME WILSON
August 19, 2018
Sign in to view read count
It's in the nature of most jazz musicians to reach out for the new but a few find their inspiration in the music of the pre-bebop era. Here are three examples. 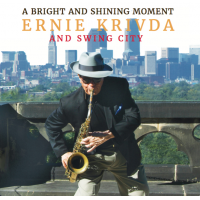 Saxophonist Ernie Krivda is a longtime mainstay of the Cleveland jazz scene, one of those tenor players whose hard-blown notes come out in a seemingly effortless flow. He's usually the sole horn on his recordings but between 1994 and 2002 he led a septet called Swing City dedicated to exploring older jazz styles through the lens of a swing combo.

This collection of the group's recording sessions combines jazz and popular standards with Krivda's own writing and is an enjoyable romp throughout. There are a few obvious callbacks to the swing era in touches like Krivda's laughing tenor solo on "Lime House Blues" and the slightly syrupy opening of "The Man I Love" but this is far more than nostalgia. The ensemble playing is crisp and sharp and the some of solo turns, like Joe Hunter's big, elegant piano on "The Nearness Of You" and Krivda's slippery r'n'b tinged tenor on a jumping "Cool, Cool Cool Of The Evening" really stand out.

Krivda's original pieces also push the group beyond repertory work. "On The Road" is a bluesy glide with a taste of "After Hours" in the piano line and Ferde Grofe's "On The Trail" in the easy rocking horn parts. "Easter Blue" wanders into Billy Strayhorn country with a haunting melody that resembles "Chelsea Bridge" and lets Krivda display the dark intricacies of his Coleman Hawkins-like ballad playing. There are even a couple of bright reworkings of standards in "Hangin' With The Hoosiers" and "The Good Lady" (based on "Indiana" and "Lady Be Good" respectively) which feature tight horn ensembles twisting over familiar chord progressions in a mid-tempo approximation of bebop. This is a window onto a tight and capable group that could play lively, enjoyable jazz. 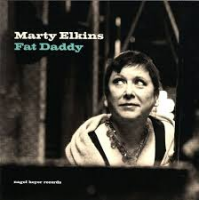 Marty Elkins is a veteran singer with a mature, slinky voice that she puts to good use on Fat Daddy. This is a set of vintage songs written between the Twenties and Fifties that she approaches with a relaxed, bluesy ease further enhanced by excellent instrumental support. Her "I Cover The Waterfront" has a simple wistfulness accented by Jon-Erik Kelso's Armstrong-like trumpet and the graceful lilt of "These Foolish Things" and "You Turned The Tables On Me" is underlined by the smooth combination of Steve Ash's piano and Joel Diamond's organ.

It's not all moody reflection. There are nice up-tempo moments here as well. "Fat Daddy" is a sexy New Orleans rhumba, "On Revival Day" has Elkins shouting soulful gospel over hand claps, organ and wah-wah trumpet and "Cow Cow Boogie" strolls along with an insinuating groove. It's the songs of regret that linger most in the mind though. The way Elkins glides over the quiet disappointment of "That's All There Is To That" with simmering organ and strummed guitar under her is sublime.

The Glenn Crytzer Orchestra
Ain't It Grand?
Self Produced
2018

Then there is Glenn Crytzer who completely immerses himself in jazz of the past. He has several groups of various sizes that play Swing Era music in the New York City area but this is two CDs worth of his full orchestra. What stands out about Crytzer's work is that he covers the entirety of 30's big band jazz from novelty tunes to sweet pop songs to hard-charging jazz blowouts. The campy likes of "I Get Ideas" and "I'm Nuts About Screwy Music" sit cheek by jowl with swaggering, in your face renditions of Duke Ellington's "The Mooche" and Jimmie Lunceford's "Rhythm Is Our Business." There's even a bit of "swinging the classics" with Tchaikovsky's "Marche Slav" and a lively version of Charlie Christian's "Solo Flight" featuring Crytzer himself on twangy guitar.

The orchestra carries three vocalists to handle different parts of their repertoire. Crytzer handles the sweeter male vocals, Dandy Wellington covers the hotter rhythm numbers like "Who's Yehoodi?" and "Shorty's Go To Go" with Cab Calloway-like panache and Hannah Gill fills the "girl singer" role with an understated sass and hipness that befits old tunes like "Massachusetts" and Crytzer originals "Just Like A Broken Record" and "A Woman Needs A Man" which carry lyrics with an unexpected bite. Crytzer's orchestra conjures up memories of Gene Krupa, Count Basie and Lucky Millinder all within one set, an impressive feat.

A Bright And Shining Moment

Tracks: Lime House Blues; Roses; Summer Time; On The Road; A Bright And Shining Moment; The Man I Love; In The Cool Cool Cool Of The Evening; Eastern Blue; Caravan; Little Old Lady; Dream Of Life; Hangin' With The Hoosiers; The Mooche; The Nearness Of You; The Good Lady; Two Sleepy People.

Tracks: You Turned The Tables On Me; On Revival Day; .How Can You Face Me; That's All There Is To That; It's Too Hot For Words; Cow Cow Boogie; I Cover The Waterfront; It's A Pity To Say Goodnight; My Old Flame; Fat Daddy; I Can't Face The Music; Sugar; These Foolish Things; Trav'lin' All Alone.

Tracks: Disc 1: The 408 Special; Black Beauty; Just Like A Broken Record; Up And At 'Em; Ain't It Grand?; When I Get Low I Get High; A String Of Pearls; Blue Jay; Steppin' In Rhythm; Who's Yehoodi?; A Woman Needs A Man; Jive At Five; I'm Nuts About Screwy Music; Thank You For The Moments; Well, Git It! Disc 2: Rhythm Is Our Business; The Glory Of Love; Jubilee Stomp; Who Needs Spring?; Shorty's Got To Go; Solo Flight; Marche Slav; I Get Ideas; The Ugly Duckling; The Little Orange Man; The Mooche; Massachusetts; Swing My Soul; Bear Foot Blues; Traffic Jam.