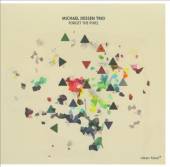 It's hard to find a precedent for trio music this balanced and dynamic. One that does seem appropriate is the sublime saxophonist Henry Threadgill's three-way cooperative Air which explored and codified myriad examples of new music expression in the 1980s and beyond. There is a similar feeling of give and take going on here—as well as an adventurous imagination about structure and form.