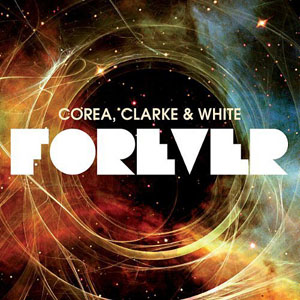 This Concord Music Group release is identical to that reviewed by John Kelman, previously released on Universal Music Japan. A two-CD set, the first disc is an acoustic piano trio recital from the original rhythm section of the 1970s fusion band Return to Forever, recorded during the 2009 RTF-Unplugged Tour, while the second is an electric survey with RTF's first guitarist, Bill Connors, along with violinist Jean-Luc Ponty and vocalist Chaka Khan, taken from rehearsals for a one- time performance at the Hollywood Bowl.

With the demographics out of the way, an acoustic trio made up of RTF's fine rhythm Section, performing mostly jazz standards, might at first seem to be a bit of a novelty. Not so. While the trio never toured as such before these recordings were made, its nearly 40-year history fully prepared the group for a look back at the Thelonious Monk, Bill Evans and Miles Davis songbooks; as well as drawing from the members and RTF's repertoire.

Trio recordings like this clearly define the division between "simply exceptional" and "without peer." It is difficult to find a truly bad jazz trio recorded—canned, as typically they are, long before the capital investment. While there is a mountain of really fine music available—very serviceable and quite enjoyable—here is little trio music that is as rarefied as that found on Forever. All three musicians so command their instruments that they exist on a performance plane defying supportive/lead roles, in favor of absolute equality, like Jimmy Giuffre's trios of the early 1960s.

Lengthy readings of "On Green Dolphin Street" and "Waltz for Debbie" warm things up enough for Chick Corea's well-known "Bud Powell," before introducing Stanley Clarke's "La Canción de Sofia," a piece that showcases the obvious empathy between the pianist and bassist, who both play with a rare touch and grace. Clarke divides his solo time between arco and pizzicato playing, his transitions guided by Corea's shifting ruminations. His melodic pizz solo is a study in superb bass playing, predicated on idea development and an bottomless loam of experience.

The RTF pieces, "Senor Mouse" and "No Mystery" translate seamlessly into the acoustic trio format. The trio plays as a spiritually conjoined unit, punctuated with Corea's left hand. These are sublime acoustic renderings of fusion classics.

Disc two's electric music is revelatory; it could be a primer to fully developed fusion, more informative than even rival Weather Report, whose collective virtuosity is typically too radioactive for immediate consumption and assimilation. For those frightened by the specter of fusion, this is the introduction that leads back to the gritty Miles Davis source. Corea's electric piano potently recalls that wild 1970s Davis sextet that hosted Corea, resulting in Live at the Fillmore East, March 7, 1970: It's About That Time (Columbia, 2001).