By Woodrow Wilkins
June 4, 2009
Sign in to view read count 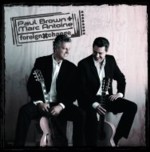 When two jazz guitarists of different styles, George Benson and Earl Klugh, came together, it was hailed as a success. The formula also worked for Lee Ritenour and Larry Carlton. Now, Paul Brown and Marc Antoine attempt to capture that flair with Foreign Exchange.

California native Brown is, perhaps, one of the most established influences in smooth jazz. A producer who has contributed a lot of the cookie-cutter programming for such artists as Boney James, Carlton, and Kirk Whalum, he is also an accomplished guitarist, playing electric guitar on this date. French-born Antoine, who performs on nylon-string guitar here, has performed for such diverse acts as Celine Dion, Sting, Rod Stewart, Queen Latifah, and Benson. He has also composed and performed for several movie soundtracks, including Get Shorty (1995), Demolition Man (1993), and The Fan (1996).

"Flight of the Conchords" has a mild samba flavor. With Brown doubling on percussion and Antoine on drums, this song is part peaceful flight and part relaxing with a drink. Roberto Vally complements on bass and Phillip Saisse has keyboard duty. Antoine leads to start things off, with an uncredited flute enhancing the flavor. After a brief solo by Saisse and another by Antoine, Brown comes forth before trading lines with Antoine to set up the song's ending.

The title song is moderately paced, with Brown and Antoine, who also adds bass duty, harmonizing on the melody. With Saisse again on keys, the leaders are supplemented by the three-piece horn section of Jerry Hey, Bill Reichenbach, and Dan Higgins. The drums and percussion are a bit underwhelming, but the leads and soft horns more than make up for that. Trumpet, trombone, and sax are in perfect sync, while the guitars complement each other well.

"Brother Earl" is a tribute to Klugh. Percussionist Lenny Castro joins Vally, Saisse, and the horn section on this all-too-short piece. Brown leads and Antoine answers on the melody. On the second pass, Brown adds a little spice while the horns lay down a not-so-subtle underscore. Vally's bass adds a little funk to this otherwise chill-out song, with Brown establishing a Carlton-esque groove during his middle solo.

Throughout most of Foreign Exchange, Brown and Antoine are accompanied by a variable lineup of bassists and keyboardists in addition to the horn section and it works out. While safely within the confines of the smooth jazz format, the songs aren't weighed down by catchy phrasing or handicapped by bland programming.

Feel the Love; Wine Night; Flight of the Conchords; Foreign Exchange; Brother Earl; On the Down Low; French Connection; What About Bob; Sweetness; Bridges of Paris.