By MARK SULLIVAN
March 3, 2018
Sign in to view read count 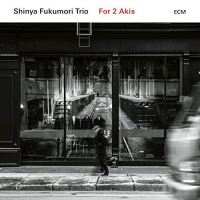 Japanese drummer Shinya Fukumori played violin, piano and guitar before taking up drums. He studied in the U.S., completing his formal education at Boston's Berklee College. But he had to move to Germany—specifically Munich, home of ECM's headquarters—to find his voice. Shinya first heard the German pianist Walter Lang in Osaka, and got to play with French tenor saxophonist Matthieu Bordenave at a jam session in Munich. The three of them have a special chemistry, with the two Europeans evincing great empathy with the Japanese cultural elements in this music.

While the leader is the main composer, all the players contribute. But there are also several Japanese pieces from the Shōwa era (1926-89) which Shinya grew up listening to with his parents and grandparents. These certainly contribute to the distinct atmosphere of the session, especially since they are not generally played by jazz musicians (with one major exception in this case). But perhaps the most striking thing is how naturally they are integrated with the original material: there is no air of exoticism here.

The album begins and ends with Kenji Miyazawa's "Hoshi Meguri No Uta" ("The Star-Circling Song"), establishing the floating, rubato feeling typical of the trio's playing. Of course this is not an unusual approach on an ECM album, but this group really takes a deep dive into it. Bordenave's light, airy tenor saxophone tone is complimented by Lang's uncluttered, lyrical piano. And Fukumori is among the most poetic of drummers, his light touch lending only the necessary textures and rhythms: reminiscent of the late, great drummer Paul Motian, a frequent contributor to ECM recordings. Shinya's title tune is like the trio's theme song: one of the first rubato-type compositions he wrote, and among the first they played together.

Walter Lang's "No Goodbye" is the most "jazz" sounding tune on the program, proof that the trio does not always have to play rubato. "Mangetsu No Yube" ("Full Moon Night") stands out among the "covers" for its almost Celtic sounding melody. "Kojo No Tsuki" ("The Moon over the Ruined Castle") is the one Japanese song jazz fans may recognize. Pianist/composer Thelonious Monk played it on Straight, No Chaser (Columbia, 1967) under the title "Japanese Folk Song" (the real title and composer credits have since been added). It was heard recently as part of the soundtrack of the 2016 film La La Land. Monk's version decorated the original melody with Monkish filigree; it is even more striking in its unadorned state.

The Shinya Fukumori Trio has a marvelously distilled sound. No matter how free their playing gets, they always sound like they are playing the song. Nothing is extraneous, and no space is wasted.