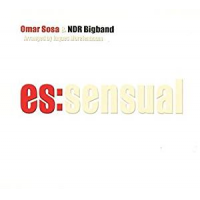 Cuban-born pianist Omar Sosa's music, be it presented in solo performances or conjured by a small-or medium-sized group, has always drawn on confidential mysticism. But that's not to say that his work doesn't lend itself to large-scale interpretation. With Ceremony (Otá Records, 2010) Sosa came out of the candlelit realms and shadows, bringing his music into full light by teaming up with Brazilian cellist-arranger Jaques Morelenbaum and Germany's NDR Big Band to stretch his worldly designs onto larger canvases. Now, eight years after that scopic set arrived, a sequel has emerged.

Es:sensual, recorded at NDR Studios (like Ceremony), pulls material from six different Sosa albums, looking as far back as two decades ago to Free Roots (Otá Records, 1997) and working with more current currency from albums like Eggun (Otá Records, 2013) and Ilé (Otá Records, 2014). Morelenbaum had quite a task in working with this music, what with the need to honor Sosa's original intentions, flesh out his compositions for the big band, and create a sense of consistency across such a wide swath of the pianist's output. But he rose to the occasion. In these eight songs, the joy, the mystery, the heat, and the history are all aurally apparent.

The album opens with ebullient tidings in the form of "Cha Cha Du Nord," where Sosa and a wonderfully raunchy trombonist make their mark. Then Morelenbaum moves on to other emotional pastures in his big band interpretations of Sosa's music: a "Reposo" that lives up to its title by playing toward a state of rest, a sunny and sophisticated "l3zero," and a gorgeously haunting "My Three Notes" that perfectly blends swirling gestures and intimate melodic thoughts.

As attractive as those first four numbers may be, some of them pale in comparison to the intriguing offerings encountered on the second half of the album. A most hypnotic and intensifying aural blend—nature sounds, marimba, hand percussion, chants, chatting and chattering horn individualists rolled into one—introduces the dynamic "Glu-Glu," artfully setting the scene for a musical thrill ride with a tapered finish; a glazed and swaying "Iyade" keeps a steady course, providing a solidly vamping foundation for frolicsome flute and sly trumpet; a tour de force take on "Anguistado" proves gripping, giving cause and pause to admire some audacious saxophone work and a well-oiled ensemble in flight; and a muted and moody "Sad Meeting" offers a conclusion with a focus on the plaintive and passionate. With the exception of a list acknowledging the soloists, this album isn't missing a thing.

Those who are new to Sosa's work may be better off starting with other albums concerned with more focused musings, learning what he's all about from the ground up before going big. But for those well-versed in his music, and especially those caught under Ceremony's spell, Es:sensual is essential.