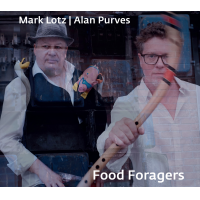 Somewhere there is a dense green forest. One can barely see through the foliage. Inside this forest is a meadow. There stands Mark Alban Lotz, surrounded by flutes of various sizes and shapes. Next to him is Alan Purves , encircled by an array of bizarre and ancient percussion instruments. Together, these two artists are creating odes to forests, jungles, and deserts, the subconscious mind, peaceful meditations, and odd and humorous tales—music that hearkens back to ancient rituals, dreams, and time before time.

In some respects the album feels like the Rosseau painting, "The Dream," come to life. The album kicks off with the wistful "Abu In the Sky." Purves lays down an African beat and Lotz enters with a flute solo, like a giant bird taking flight over vast spaces of wilderness.

"Echoes of Life Hereafter" starts off with Purves establishing a mysterious gait on framed drum. Slowly Lotz enters with sweeping arcs on his flutes. It's as if one were riding a camel softly across a desert underneath a chilly, panoramic, starry sky. "Endurance," the longest composition on the album, has a melody that anchors in one's mind. It suggests both a dance and an adventure, or maybe a dance that becomes an adventure? "River" has the air of India about it, like a canoe ride down the Ganges. Purves's horns have a sitar sound. And Lotz explores the deep registers of the bass and contrabass flutes to provide a curving counterweight to the steady beat.

The reverie reaches its apex with the beautiful "Lullaby for Time." Here Purves's beat on the frame drum perfectly complements Lotz's long legato notes on flute.

The album is certainly not all vision quest. For example, it features novel tunes like "Hog Time," "Kingfisher," and the title cut, "Food Foragers." In these selections, Purves creates sounds resembling pig snorts as he rips or mimics musically the wilds of the Amazon rain forest. On "Hanging Out," Lotz's flute line and Purves's percussion conjure the image of being jostled through a Chinese urban landscape in a rickshaw, as flocks of sparrows in the squares scatter in undulating patterns. "Belly Buttons" will get you off your duff and into your dancing shoes, and the album ends with the infectious "I'm So Sorry Blues." This latter number feels straight out of the doo-wop lexicon, except in this version, ancient drums and fluttering flutes replace the Sha Na Na vocals.

Never forceful or heavy, Purves' gentle percussion lines complement Lotz's adventurous and meditative flute lines. One could be forgiven for hearing in this album a little of Paul Horn and his seventies collaborations with Nexus.

Abu In The Sky; Hog Time; Echoes Of A Life Hereafter; Piepkuiken; Petal Of A Rose; Endurance; Ice Breath; Kingfisher; Back Scratcher; River; Belly Buttons; Food Foragers; Hanging Out; Lullaby For Time; I Am So Sorry Blues.