By Edward Blanco
March 6, 2010
Sign in to view read count 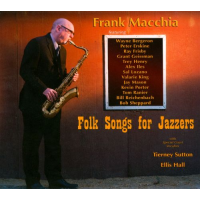 Never the conventionalist when it comes to music, Grammy-nominated composer/arranger and saxophonist Frank Macchia develops another theme album, this time reinterpreting time-honored traditional American folk songs in another innovative frame of jazz on Folk Songs for Jazzers. With a history of releasing concept albums like the saxophone-heavy Saxolollapalooza (Cacophony, 2008), the Third Stream-tinged classical jazz Landscapes(Cacophony, 2007), the orchestral Emotions (Cacophony, 2006), and the previous Animal series recordings, Macchia once again summons his creative juices in recording some classic American folk songs, which he has always loved, casting them in an entirely new light.

The amazing jazzed-up orchestrations of fourteen standard folk songs, re-energized and reinterpreted like never before, are a testament to the arranging skills of this two-time Grammy nominee. In another example of his unconventional approach to music, Macchia chose to use a big band for this project but eschews the normal four trumpet, four trombone, and five sax sections in favor of several multi-woodwind players and a standard rhythm section augmented by vibes on several selections. The thirteen-piece band assembled for this disc features some of Los Angeles' best jazz musicians, among them Wayne Bergeron,Bob Sheppard, Bill Reichenbach, Peter Erskine, Grant Geissman, and Tom Rainer.

Vocalist Tierney Sutton graces the set voicing a soft, humbling rendition of "Red River Valley," while the other vocalist to appear here is Ellis Hall, singing an uplifting version of the somber "Amazing Grace" buoyed by Sheppard's tender tenor solo. With a variety of styles included in the lengthy repertoire, the ballad-like pieces are among the best, beginning with the cool swing rendition of Stephen Foster's familiar "Oh Susanna" and continuing with the spacious "Tom Dooley" with Macchia on a spirited alto clarinet solo as pianist Rainer takes a poignant piano solo. "Hush, Little Baby," an old American lullaby, is arranged here with a bossa nova tinge, featuring the trombone voice of Reichenbach and Rainer playing against the backdrop of four bass clarinets.

The vast majority of the music is presented in more of an up beat and livelier fashion beginning with the opening "I've Been Working on the Railroad" hovering in funky territory and quite electric in texture. "Skip to My Lou" is almost unrecognizable, performed with a Latin flavor and a lot of piccolo sounds while "The Arkansas Traveller" comes across as an in-your-face, boisterous, loud number where guitarist Geissman plays like he's performing in hard rock band. There are many highlights on Folk Songs for Jazzers not to be missed as Frank Macchia crafts another unique non-traditional session of interesting jazz music albeit from the foundation of American folk music.