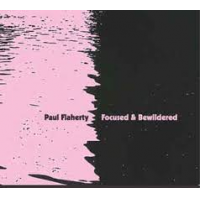 Saxophonist Paul Flaherty has long been one of the foremost exponents of the fire-breathing, free-jazz tradition of Albert Ayler, Peter Brötzmann and Charles Gayle. He is certainly one of the most prolific, with scores of recordings under his belt. When he joins forces with frequent collaborators such as Chris Corsano, Wally Shoup or Bill Nace, the maelstrom that typically follows is about as hair-raising as it gets. But, what isn't as often noted is that Flaherty has a more subdued streak, in which his debt to the blues or jazz rises to the surface—hence, the value of Focused and Bewildered, his latest solo recording. Like many of the best artists who specialize in free improvisation, Flaherty feeds off the sparks supplied by his counterparts; but, in their absence, he seems freer to pursue his muse wherever it leads and, in this case, it sometimes takes him in surprisingly less-tumultuous directions.

In addition to the idiosyncrasies of the solo format, Flaherty's somewhat more restrained approach here may stem from the occasion that inspired the recording: an epiphany while sitting in his car, exhausted after a late-night gig, in which Flaherty heard a strange voice that alerted him to a thief who was about to break into his neighbor's car. Flaherty was able to honk his horn in time to scare off the thief, but the bizarre event left an impression on Flaherty, and the titles given to the improvisations on this record attest to its impact. "Shaped by Heavy Light" and "It Stomps Among Us" reveal Flaherty's openness to something metaphysical going on here, the idea that he is a vessel for other forces, which he clearly sees as a metaphor for his own creative process. There is thus an abiding humility in this music that helps explain the wide range of emotions on the record.

Sure, there are the expected expressions of raw intensity—a piece like "Public Outrage Blues" includes an aggressive onslaught of repeated, jagged phrases, for example—but even those segments are tempered by more lyrical turns that seem to open the music to other places. It is in the juxtapositions between the abrasive, ragged flights and the graceful, bluesy turns which emerge on a piece like the closing track, "One Touch of a Car Horn," that the record displays much of its power. This is not to say that the music is "accessible," exactly; Flaherty has invested too many years pursuing his distinctive craft to produce music that is easy on the ears. But an album like this one does challenge facile appraisals of energy music as lacking the capacity for gentler emotions. They are definitely here, even if they are found chiefly in the crevices that form amidst Flaherty's more unruly excavations.

Where Has the Future Gone Lately?; Shaped by Heavy Light; Patience Finds the Long Game; Children in Need of Defense; You’re About to Be Robbed Dude; It Stomps Among Us; Power or Service; Flabbergasted Empathy; Public Outrage Blues; One Touch of a Car Horn.