Fly: Fly: Year of the Snake 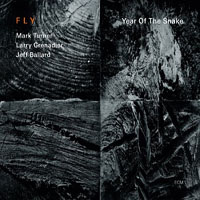 When a group of musicians works together more often in extracurricular configurations with other leaders, what do they do when they come together for their own project? In the case of saxophonist Mark Turner, bassist Larry Grenadier and drummer Jeff Ballard—who, individually and collectively, have worked with everyone from pianist Brad Mehldau and guitarist Kurt Rosenwinkel to trumpeter Enrico Rava—it's Fly, the trio that released its self-titled debut on Savoy Jazz in 2004, making the jump to ECM in 2009 with Sky & Country. With a shorter gap between sessions—but still a three year break— Year of the Snake, as the fourth of ten ECM releases so far in 2012 alongside pianist Steve Kuhn's Wisteria, saxophonist Tim Berne's Snakeoil and drummer Billy Hart's All Our Reasons, continues to lay waste to claims of a disproportionate focus on music beyond the 48 states by the heralded German label.

Once again, Year of the Snake brings together compositional contributions from all three players, but takes a left turn from Sky & Country with the inclusion of the five-part "The Western Lands," its first part a dark-hued premise from Turner that's closer to contemporary classical music than the jazz tradition that's a clear reference point for the trio. Four additional parts, scattered throughout the set, are group improvisations stemming from Turner's miniature opener, with Grenadier and the saxophonist weaving lines that orbit, diverge and converge, and Ballard's role more colorist than rhythmist. Ranging from just over half a minute to a mere three minutes and change, these brooding tone poems act as way stations along an hour-long program that twists and turns the premise of the saxophone trio into something altogether new.

It's interesting to compare and contrast Year of the Snake with British saxophonist Andy Sheppard's well-received Trio Libre, released by ECM earlier this year; another reed-based trio record that counters preconceptions of what such a lineup can accomplish. While Sheppard's set weighed heavily on lyricism and a pulse that was as often suggested as it was explicitly played, Turner, Grenadier and Ballard aren't shy to capitalize on the mastery of groove honed in a variety of contexts by the bassist and drummer. Ballard's "Benj," for instance, pushes forward irresistibly, even as it's delivered with the kind of loose interpretive simpatico that's a clear result of nearly 20 years playing together.

At over ten minutes, Grenadier's "Kingston" is more oblique, and a feature for Grenadier's arco playing—which, more dominant this time around, represents a clear evolution for Fly that results in not just a "bigger" sound, as Ballard has suggested, but a more elastic, serpentine ambidexterity. The trio now has greater leverage to divide its time between freer concerns and the more rhythm-centric approach of Turner's "Festival Tune"— unsurprisingly, a more cerebral affair than Ballard's surprisingly episodic "Diorite," which unfolds over its complex six minutes with repeated rhythmic motives, a challenging but ultimately visceral groove and a feature for Turner's remarkable upper register control.

If Fly's raison d'être is to consolidate its members' extracurricular work, then what Year of the Snake demonstrates with crystal clarity is that each player's language, command and sophistication continue to evolve as the result of their efforts; but it's only as Fly that they can truly exercise everything they've honed with complete and utter freedom. Year of the Snake will undoubtedly challenge those familiar with Turner, Grenadier and Ballard's work in intrinsically accessible contexts like Mehldau's Trio, SFJAZZ Collective and projects with guitarist Pat Metheny; but for those ready, willing and able to unshackle their preconceptions, the rewards are great—and many.