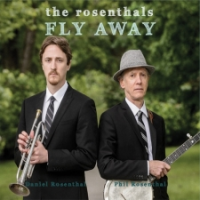 In many ways, trumpeter Daniel Rosenthal has always been the odd man out in the Rosenthal clan. The members of this tight-knit, literal-cum-musical family have long been known as a folk and bluegrass breed, but Daniel took a turn toward jazz and never looked back; that is, until recently.

After leaving the New England Conservatory, where he studied with revered jazz figures like composer/valve trombonist Bob Brookmeyer and soprano saxophonist Steve Lacy, Daniel joined the Either/Orchestra in 2006 and began expanding his own musical outlook with that worldly-and-forward thinking outfit. Five years later, he released his debut album, Lines (American Melody, 2011), which pointed toward Ornette Coleman country, but referenced his upbringing with the inclusion of banjo on four tracks. Now, the prodigal musical son returns to the family fold.

On Fly Away, Daniel Rosenthal teams up with his father—vocalist/multi-instrumentalist Phil Rosenthal—for a folk-ish effort with a jazz-tinged aura; if an American Recordings-era Johnny Cash had enlisted the services of guitarist Bill Frisell, circa Nashville (Nonesuch, 1997), and invited Frisell's trumpet foil—a Heaven-sent (Sterling Circle, 2002) Ron Miles—along for the ride, it might have ended up sounding something like this.

Phil's vocals serve as the focal point on the majority of this material, with Daniel's trumpet providing trumpet obbligato in the space between and simple-yet-effective solos. Phil also lays the groundwork that supports these songs, with banjo, mandolin and guitar paving the way. The supporting cast, which includes Beth Sommers and Naomi Sommers—Daniel's mother and sister, respectively—on backing vocals, does just what it's supposed to do: bring out the beauty that exists as father and son find common ground.

The majority of the songs on Fly Away lean toward the patriarch's musical patois, but a few numbers speak to both men's tastes. "Single Again," for example, blends country music and old school New Orleans flavors, with some polyphonic cross talk between Daniel and alto saxophonist Rick Stone (Guitar), while "Sunlight On The Garden" features some surprising harmonic twists and Daniel's most engaging, jazz-centered soloing on the album; the Frisell-Miles connection is most apparent on the latter number.

Fly Away may end up being filed under folk, but that's too simplistic a resting place for this one; The Rosenthals don't really set up camp in one single place, and that's part of what makes this one so appealing.