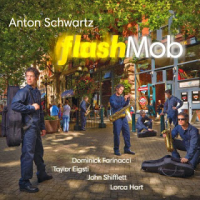 While attending Harvard University, Anton Schwartz held down the first tenor saxophone chair in its jazz band, yet relocated to the San Francisco Bay Area, where he became a significant jazz force, also serving as an educator and mentor. Flash Mob—which is perhaps his most robust album to date—denotes his fifth venture as a leader and first album since Radiant Blue (Antonjazz, 2006). Schwartz reaps the benefits of nascent talent and possesses a commanding presence amid his full-bodied tone and fruitful association with trumpeter Dominick Farinacci, coupled with a diverse track mix of memorable works. They dish out a drawling blues, pensive balladry and surging up-tempo pieces with a few nods to the '60's Blue Note Records era. And the frontline packs a formidable wallop via regal choruses and zesty unison lines.

Other than Schwartz' impressive originals and a Kenny Dorham cover, the quintet spins Thelonious Monk's classic "Epistrophy," into a springy, New Orleans-like shuffle vamp. Thankfully, the musicians impart a nouveau spin in lieu of rehashing the original pulse, unlike the hordes of orthodox Monk covers by others. Schwartz sports a gruff and stinging tone along with the spicy melodic intervals that briefly transform into a straight-forward rock groove. Farinacci adds more oomph with his brash and soaring solo while pianist Taylor Eigsti comps and provides counterpoint prior to his impactful breakout, comprised of whirling single note lines. Indeed, Schwartz and his band are in full stride on this persuasive release, teeming with multicolored mosaics, vigorous soloing spots and strong compositions, radiating in a modern jazz delight that offers residual enjoyment on successive listens.